Hey, all! I’m still alive and Simming — I’m just in a tangle of frustration at the moment. For one, I haven’t had as much time to play over the last few weeks, so development on Ely Corners has ground to a proverbial halt. Not to mention it crashed on me the last few times I played, which I suspect was caused by graphics issues/too much CC/probable lag from running Twallan’s Story Progression and other mods. But I don’t want to have to cull a bunch of the custom content that I use in Ely Corners or get rid of Twallan’s mods, so I’m pondering upgrading my system or getting a new one. Of course, either one of those will require a hefty bag of Simoleons. Where’s a money tree when you need one?
END_OF_DOCUMENT_TOKEN_TO_BE_REPLACED

Thanks to all who voted in the Pub Name Poll! The winning name was “The Cornerstone”, suggested by Lilymayrose. I think it’s a very fitting moniker for the place!

Now for the second community lot in town — the town hall/police station. I hadn’t planned on building one originally (at least not for awhile), but I wanted to use certain aspects of Twallan’s Register and Careers mods, so I had to bust my “no rabbithole” rule and put at least a City Hall rabbithole rug somewhere in town. 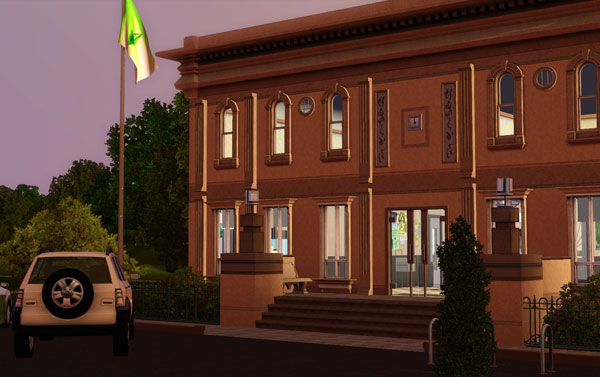 END_OF_DOCUMENT_TOKEN_TO_BE_REPLACED

OK, I’m trying something new here — a poll! Listed below are three suggestions (from Lilymayrose, Kim, and Kay respectively) of what to call the pub in Ely Corners. If you feel like it, vote for your favorite. I’ll close the poll before my next blog post, which will probably be this weekend.

And because pics are a good thing, here’s a gratuitous one of Spencer: 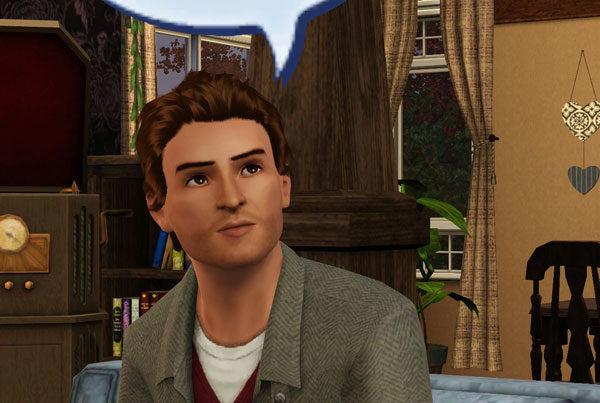 I have a plan when it comes to developing Ely Corners and the rest of Wilshaw County (what I’m calling the whole map), but I’m not approaching that plan very methodically. I have lists of Sims I want to create, lots I want to build, and gameplay things I want to try, but I work on them in a very haphazard fashion, according to whatever mood I’m in when I boot up the game. So these blog posts will probably seem kind of random for awhile.

Last weekend, before my Fran interlude in Riverblossom, I added another family to Ely Corners. Moira Trivett used to work as a corporate drone in Pigeondale, but is now a freelance photographer and collector of rocks. 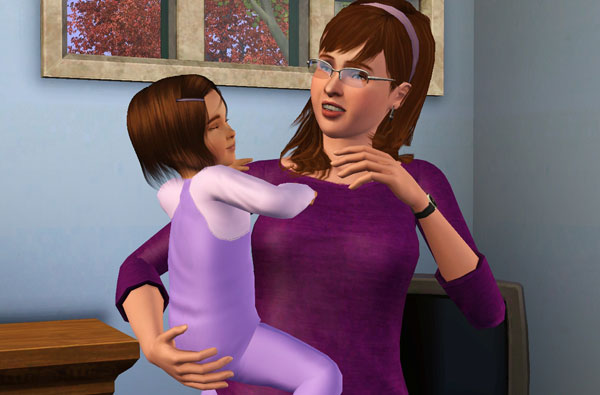 END_OF_DOCUMENT_TOKEN_TO_BE_REPLACED

I’ve been working on another family — they’re the main farmers of my town, and also the owners of the local pub. They live in the Homewood, where I was originally going to put the Deshannons. I gave it the quick and dirty decorating treatment because I was eager to work on the pub, so it’s mostly EA stuff; I’ll probably spruce it up later on.

This is Will Sothers, the younger son of the family.

He’s trying to watch the game, but his parents, Hannah and Owen, insist on dancing right in front of the TV.
END_OF_DOCUMENT_TOKEN_TO_BE_REPLACED

Iâ€™m still plodding along on turtle speed (whoa, Sim City flashback) in Ely Corners, and finally finished the Deshannonsâ€™ house. It is based on another 1920s Sears Home, the Vallonia, which I also did in TS2. 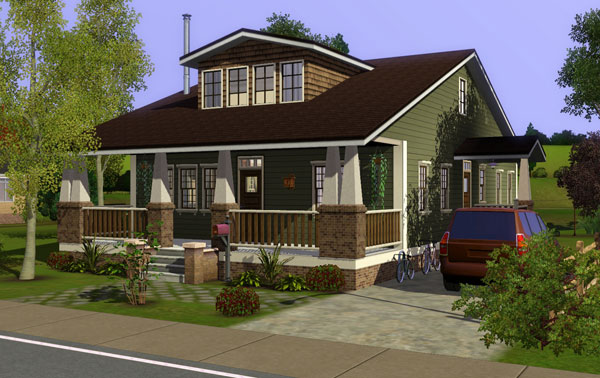 By the way, I am really lovin’ the new landscaping set from Simply Styling â€“ it’s nice to have some more “filler” plants that aren’t flowers for my yards.
END_OF_DOCUMENT_TOKEN_TO_BE_REPLACED

Hey all, thanks for your comments and feedback on my last post! I’ve decided to go with the Tamo eyes and skins. The Aikea Guinea ones were great, but it was time for a change.

Progress on the homes and families in Ely Corners is moving slowly but steadily. This past week I worked on a new family and their home, and also began a new home for the Deshannons (I decided that Doug is no longer the townâ€™s farmer).

For the new family, I was inspired by Velvetâ€™s jazz paintings and baufiveâ€™s Salvaged/Antiques set, so I created a jazz musician/music teacher/recording engineer/coffeeshop owner (Sims have to play mutiple roles in Ely Corners, since itâ€™s such a tiny town) named Jerry Dufreyne, and his wife, a sculptor/painter/collector named Bianca. They have one child, a boy named Kitt, but I have a feeling theyâ€™ll have another kid at some point, since Jerry is Family-oriented. 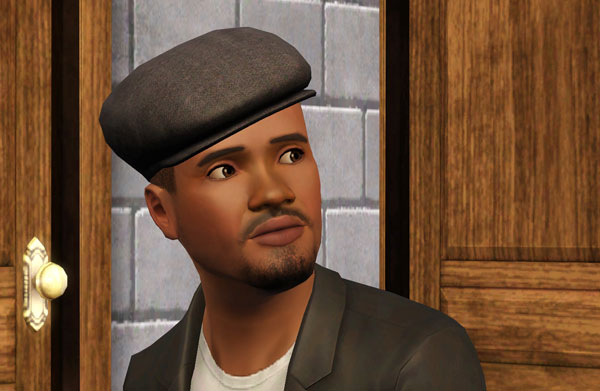 Hey all, I hope you had a fantastic holiday season and are enjoying the new year so far. I thought I’d share a little bit of what I’ve been working on Sims-wise lately. First off, an unfortunate happenstance: I won’t be posting anymore of Morna in Los Aniegos, because I started receiving an Error 12 whenever I tried to save her game. It’s likely that my computer doesn’t have enough memory to handle such a large world. It’s too bad, because what I saw of Los Aniegos was quite promising, and for that big city feel, I preferred it to Bridgeport. I guess I’ll have to save my Simoleons and splurge on some RAM!

So, saying adieu to Morna for awhile, I started up a project in an empty version of Riverview. I’ve never had any save problems in that world (knock on wood!), and I’ve always liked the countryside/farming community feel of it. Plus it’s an EA world so I feel better about mucking around with it and making it my own (I’d have a hard time refashioning a gorgeous custom world like Redcliffs for my own use — it just wouldn’t seem right to mess it up). With the in-game World Editor we can now delete and add lots, so I’ve been using that quite a bit, but I save often because sometimes deleting or adding a lot can really hose up the roads, at least graphically.

I’m going to build up my version of Riverview very slowly in small, manageable bits, starting with that little area across the river where the Brokes had their trailer park. Since the primary road there is Ely Road, I’m calling it Ely Corners for now. It’s my “founding” neighborhood, and where my first families will live. I’m basing all of the houses in Ely Corners on houseplans from my 1926 Sears Roebuck book (probably my favorite houseplan book ever, which won’t surprise those who remember some of my Sims 2 houses!). 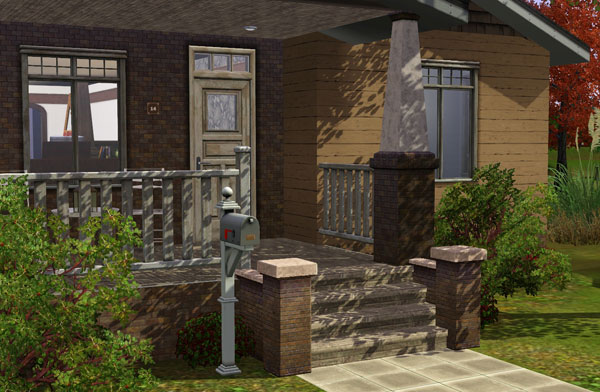