Cecily Brayton lay on her bed, staring at the edge of the window and thinking about James Haddaway. She had seen him once in the week since their furtive encounter at the Granville Hotel — they had driven one of his fatherâ€™s motorcars down a solitary country road, with time only to exchange a series of desperate kisses and impassioned sighs before returning to town. She wondered when she would see him again, if it would be today or tomorrow, if he would finally propose, or perhaps seize her in the middle of the night and persuade her to elope in some far-flung locale.

A knock at the door roused her from this familiar avenue of thought. It was Carol, summoning her to breakfast.

â€œIâ€™m not hungry, thank you,â€ Cecily called lazily from the bed. The door burst open and Carol stared at her in amazement.

â€œNot hungry? Go down there and tell Arianna yourself! She made her famous pancakes especially for this occasion! Donâ€™t you want to see Mayhew?â€

Cecily sprang up suddenly, her eyes large. â€œOh dear! I forgot! Mayhewâ€™s back!â€ Within a moment she was following Carol down the staircase. â€œHow is he?â€ she whispered excitedly. â€œHas he proposed to you yet?â€

Carol hushed her with a violent wave of her hand and hurried off to the kitchen, leaving Cecily to wander into the dining room alone. She found her father and Mayhew already seated there, chatting amiably. Cecily greeted Mayhew with apprehension, feeling a twinge of guilt for having borrowed his hotel room without his consent while he had been away, but he seemed glad to see her and gave no indication that he suspected her of anything wicked.

Arianna served her famous pancakes while Carol sat down next to Mayhew, and everyone attacked the meal with vigor, forgetting conversation for a time. Finally Arianna spoke, addressing Mayhew. 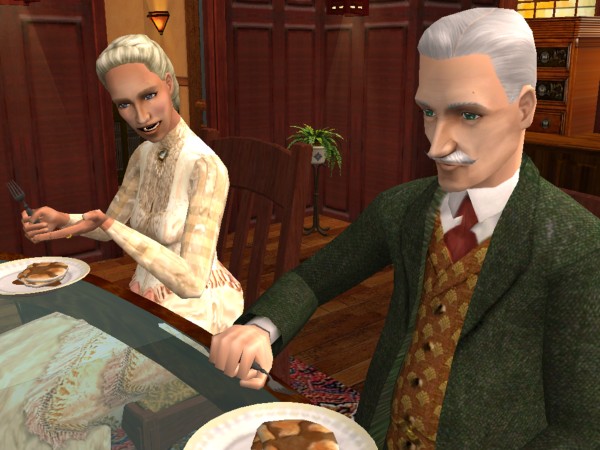 â€œI havenâ€™t heard anything about your trip yet,â€ she said in her mild way. â€œDid you find great inspiration for the new hotel?â€

The young architect, who had nearly finished all of his pancakes, set down his fork. â€œWhy, yes, actually,â€ he replied with a grin. â€œI was so inspired that I drew a set of preliminary plans while I was in Castello and shared them with Mr. De Groff as soon as I got in last night. He seemed quite pleased with them. So pleased, in fact, that he gave me a handsome bonus, which will allow me to buy a house of my own here in May Green.â€

END_OF_DOCUMENT_TOKEN_TO_BE_REPLACED

There were only two respectable hotels in May Green, and the Granville was the finer of the two. It was best known for its grand lobby â€“ three stories tall â€“ full of warm, polished wood and sparkling lamps. But Cecily Brayton never saw the lobby of the Granville; she entered through the back door, by the kitchen, and made her way up a secluded stair. As she glanced cautiously to and fro, she thought of Carol and how many times she must have done the same thing, risking the rampant gossip of the town busybodies in order to spend a few quiet moments with her beloved.

The door creaked open below, and Cecily paused on the landing. Looking down past the balustrade, she saw the top of Jamesâ€™s head as he made his way up the stair. Her stomach whirled with anticipation as she continued onward, reaching the second floor and the room labeled â€œ201â€. Fitting the brass key into the lock, she took a deep breath and turned the knob.

It wasnâ€™t at all what she had expected. Though Carol hadnâ€™t gone so far as to describe the exact layout of the suite, Cecily had imagined a separate drawing room at least, where Mayhew and Carol sat and sighed at each other, but it was all one big room, and the most prominent piece of furniture in it was a massive four-poster bed. Cecily flushed at the sight of it, as though she had walked in on Mayhew lounging in his pajamas.

In her surprise, she had left the door wide open, and through it strolled James, his footsteps light and hesitant.

â€œI donâ€™t think anyone saw,â€ he said quietly, shutting the door behind him. 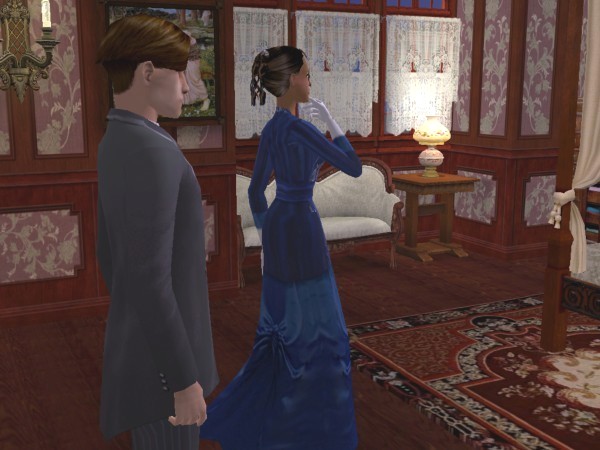 â€œLovely, isnâ€™t it?â€ Cecily said, trying to hide her sudden discomfort. â€œIâ€™ve always heard the Granville was elegant. Though I expected Mayhew to have moreâ€¦rooms.â€

END_OF_DOCUMENT_TOKEN_TO_BE_REPLACED

As the brilliant blue sky relaxed into twilight, Cecily Brayton sat in her fatherâ€™s study, her eyes closed, her mind fixed happily on the success of her tea party. Despite a few alarming moments, it had gone off better than she could have hoped, and she felt with some certainty that James Haddaway now perched in the palm of her hand.

And Iâ€™m in the palm of his, she thought dreamily, remembering how masterfully he had wrapped her up in his arms and kissed her. Compared to Samuelâ€™s kiss â€“ the only other kiss she had experienced in her young life â€“ well, there really was no comparison. Samuel was like a violin playing some sweet but simple tune, while James was the whole orchestra, soaring and blasting in a heart-swelling crescendo.

It was unfortunate that Carol had interrupted the glorious music to serve her special yellow cake with nutty frosting, and Cecily made a point of telling her so later, but it had been a lovely interlude all the same. When she and James parted, he murmured, â€œSee you soon,â€ and never had those words thrilled her with such rich promise. Even now, her whole being tingled with the memory of it. 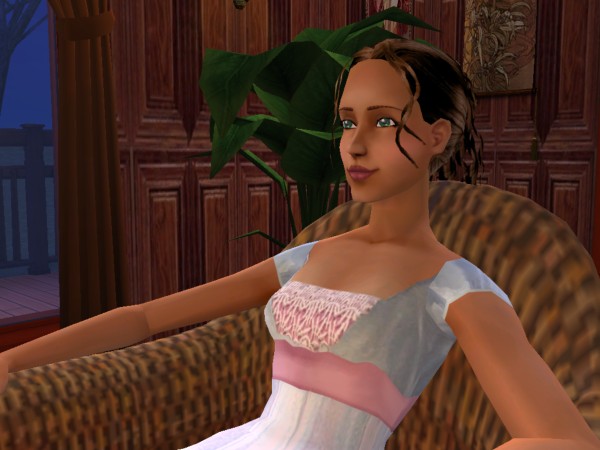 The clanging of the doorbell roused Cecily from her blissful state. Could he have meant this soon? she wondered, springing from her chair.

â€œIâ€™ve got it!â€ she shouted into the hallway. After a quick glance into the mirror to make she sure she looked presentable, Cecily opened the door.

END_OF_DOCUMENT_TOKEN_TO_BE_REPLACED

It was a pleasant day in late June â€“ not that the weather was ever unpleasant in the mild summery town of May Green â€“ and the bees were exceptionally busy humming over the flower-strewn lawn of Brayton Hill. A fluttering breeze, just strong enough to rustle the trees and cool the skin, made its way through the lush green corner of the yard where Cecily Brayton sat surveying her assembled guests. 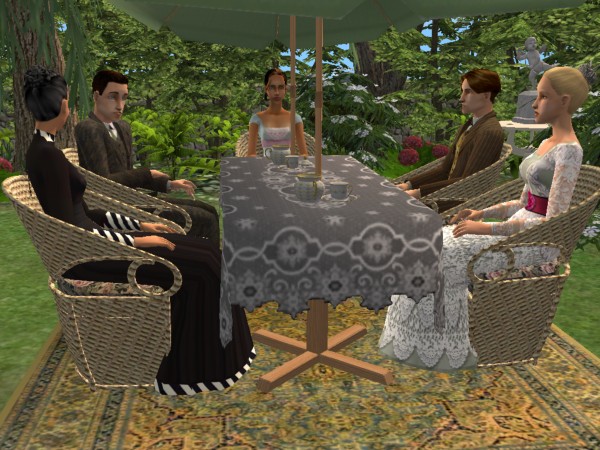 A perfect day for a tea party, she thought, rather pleased with herself for conjuring up the idea, though it hadnâ€™t come easily. For days she had pondered how best to contrive a meeting with James; after all, he had declared his love for her, and she need only be alone with him for a few moments so that she could return the sentiment. But it was a tricky business â€“ she hadnâ€™t told James that she loved Samuel, but he might have inferred it from her actions, and she didnâ€™t want him to feel like some kind of consolation prize.

END_OF_DOCUMENT_TOKEN_TO_BE_REPLACED

Hey guys, just wanted to let you know Iâ€™m still working on the next Brayton update. I really wanted to post it tonight, but itâ€™s taking longer than I expected â€“ I took something like 300 pictures for this one, and Iâ€™m trying to whittle it down to about 25 as I write the story. Unless you guys want a REALLY long update this timeâ€¦ ;-)

Iâ€™m hoping to finish the update late tomorrow night, but in the meantime, I have a few Brayton outtakes to share with you. These are things you donâ€™t see every day in May Green: 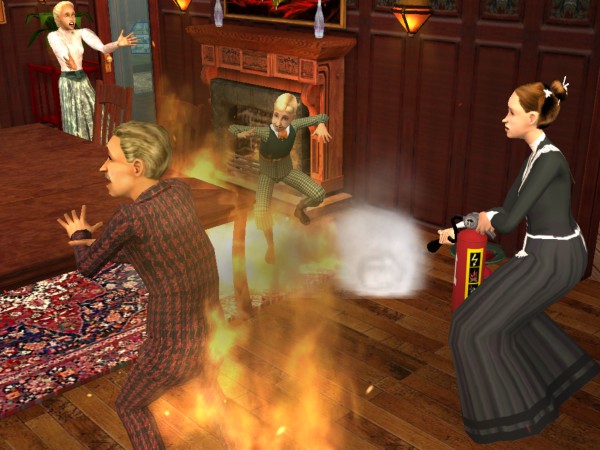 The Braytons find out what happens when you place a chair near the fireplace, start a fire, and have someone sit down in said chair

END_OF_DOCUMENT_TOKEN_TO_BE_REPLACED

Cecily shut the door and stood in the foyer a moment, pushing a few curls, which had shaken loose when she hurried home, back into place. Her father strolled in from the study, medical journal in hand, and smiled.

â€œI was just about to ready the carriage,â€ he said. â€œI hope you had a good time?â€

Cecily nodded absently and leaned over to kiss her father on the cheek. â€œWonderful time,â€ she said, a little breathless. â€œIâ€™m exhausted, though. I didnâ€™t know parties could be so rigorous.â€

Harry Brayton laughed indulgently at his daughter. â€œDance with one too many fellows, eh? Well, youâ€™d better get off to bed then. Iâ€™d scold you for walking home alone if I werenâ€™t a bit tired myself. Good night, Cecily.â€

Cecily smiled brightly and said good night before making her way upstairs. She was met at the top stair by Carol, who had fidgeted her apron into wrinkles. The normally sedate maid could hardly contain her excitement as she followed Cecily to her room.

â€œWell, how was it?â€ she whispered, closing the door.

The cheerful expression that Cecily had worn for her father washed away in an instant. 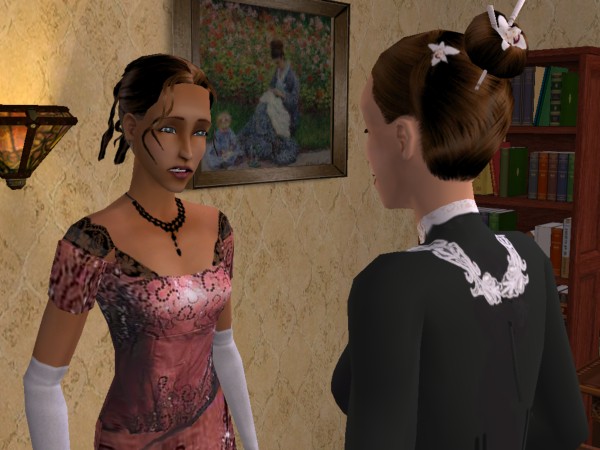 END_OF_DOCUMENT_TOKEN_TO_BE_REPLACED

The light from the chandelier glinted off the partially bald head of the butler as he welcomed Cecily into the resplendence of Haddaway Hall. The young lady entered with an apprehensive smile and paused, momentarily overwhelmed, as her beaded satin dress swished to a halt. Instinctively she scanned the room for James, whom she had just seen through the drawing room window walking towards the foyer. Unfortunately she saw only a maid in a crisp black dress carrying a tray laden with hors d’oeuvres.

The butler brushed past Cecily and made for the back of the house, then turned when he realized Cecily wasn’t following him. He came back to her, arching a curious brow.

“Everyone is gathered in the ballroom,” he said politely, with the mildest tinge of impatience.

“Everyone?” Cecily asked, stalling for time. Through her immaculate white gloves, her fingers clutched at her skirt. She was suddenly more nervous than ever, imagining the whole Haddaway clan waiting in the ballroom, glancing up as she entered, leaning over to each other and whispering…except for James, who blithely pretended she didn’t exist…

“Miss Brayton? Are you quite well?” asked the butler.

Cecilyâ€™s breath wavered, but she recovered it. 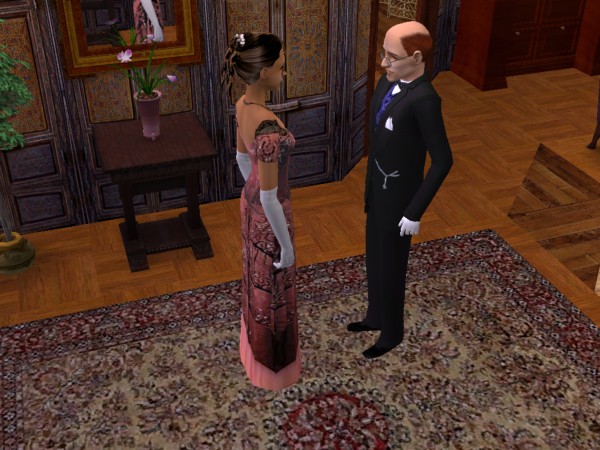 “Yes, I’m fine. Thank you.” She presented him with her most placid smile.

The butler, one brow still arched in doubt, turned on his heel and led Cecily through the foyer.

END_OF_DOCUMENT_TOKEN_TO_BE_REPLACED 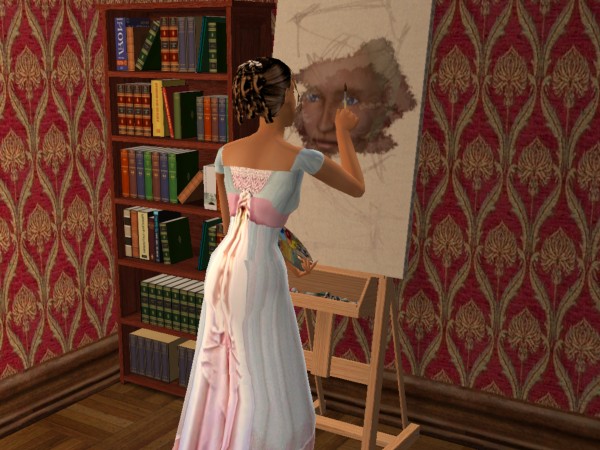