I am still hard at work on Ahanu Bay and the next Fran update. Unfortunately it might be awhile before I post them, since I’m going on vacation soon, and my free time before I leave is dwindling down to almost nil. However, I do have a few pics I can share with you, just for fun. They’re just views of Ahanu Bay and the cottages.

The first is a postcard type of shot. I discovered this view while moving the camera through the backyard of the Begonia cottage: 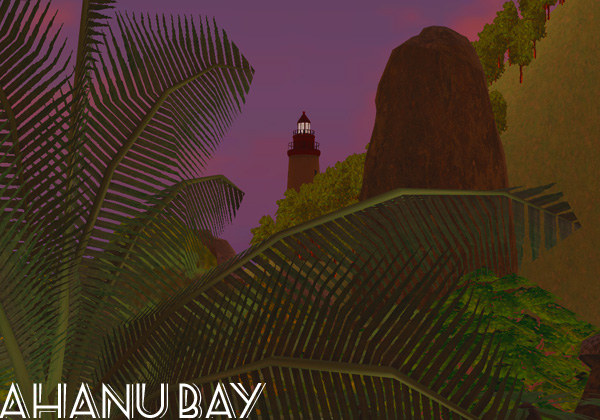 END_OF_DOCUMENT_TOKEN_TO_BE_REPLACED

Good evening, dears! Do you remember old Maude? Some of you may. For those of you who don’t, I’m the friendly phantom that used to flit around Mt. Geneva, spying on its residents and spinning tales out of their triumphs and tragedies. A lonely job, to be sure, but better than hiding in one’s tombstone and venturing out only to scare young ruffians.

When Mt. Geneva disappeared (one day it was there; the next day it was not! Tragic!), I escaped to tranquil Shady Bluff. For awhile it showed promise, but then it, too, withered away, and I was left watching the squirrels run around and chitter at each other. Not very exciting for an old busybody like myself! Maude needs people, you know, not squirrels. 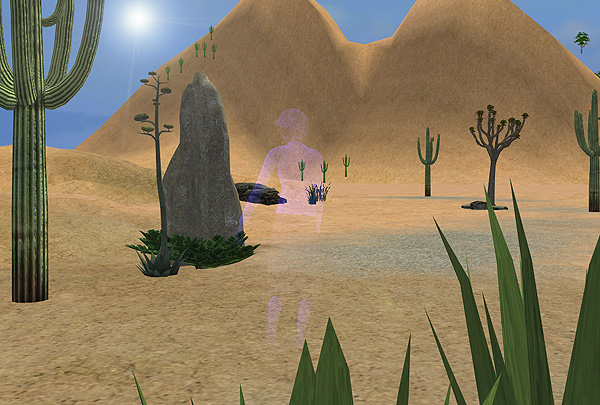 So I became a wanderer. I drifted away from Shady Bluff and traversed the vast lands of Sim Nation, through forests and fields and desert. Mostly desert. I don’t know what I was looking for, dears, but it certainly wasn’t turning up.

END_OF_DOCUMENT_TOKEN_TO_BE_REPLACED

Soâ€¦Iâ€™m working on a second neighborhood in addition to Annabel Island. (You know, because I donâ€™t have enough Sims projects going on right now. *weak laugh*)

The nifty thing about this hood, though, is that Fran will end up here eventually — so itâ€™s a Fran project as well as a general hood-building project.

Having two neighborhoods in progress works out nicely for my Sims-related ADD (tm Kay). When I get the urge to play my Victorian Sims, I can visit Annabel Island, and when I want to play modern Sims, I can pop over to Fran and Ahanu Bay.

Itâ€™s all Jadeâ€™s fault — I am seriously hooked on hood-building! I havenâ€™t gotten very far yet with either hood, but even the preliminary work — the planning, pondering, and downloading helpful mods and objects — is so darned entertaining.

Anyway, I worked on Ahanu Bay a little bit last night and thought Iâ€™d share it with you guys. Keep in mind itâ€™s a work in progress, so itâ€™s in the very early stages of development. Iâ€™m experimenting with building the hood somewhat organically; that is, I want the hood to grow from the Sims and from gameplay rather than the other way around. 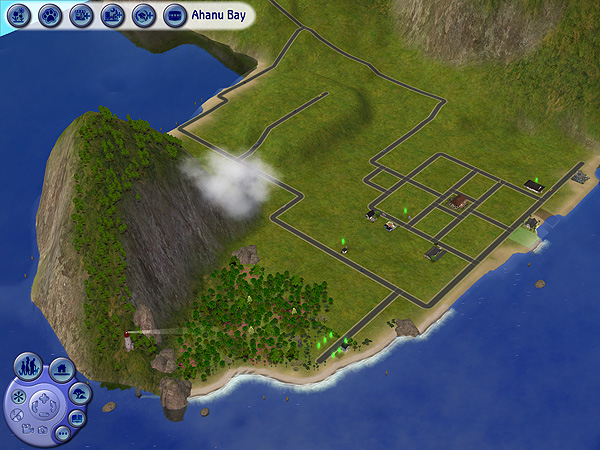 Overview of the hood

Iâ€™m using the Bluewater Village terrain, but Iâ€™ve redone the roads more to my liking. I wanted to have plenty of room for beachfront property and a little grid for the town proper. You can see my Mediterranean-style town hall in the center of the grid. The rest of the buildings will be placed on the streets surrounding it and along the shoreline.

I probably wonâ€™t use much of the rest of the land â€“ I want to keep Ahanu Bay small and manageable. So as with Annabel Island, Iâ€™ll fill it up with trees, landmarks, and maybe the occasional â€œruralâ€ home or business.

More about Ahanu Bay after the jump!