OK, since I can never think of good titles for my posts, I decided to go with whatever song happened to be playing in my iTunes. In this case, it was “Big Empty” by Stone Temple Pilots. Somewhat fitting, since my hood is big and, well, pretty much empty.

Some good news: my Snag-It is working again, and I didn’t have to re-purchase it. Woot! I just had them re-send me my key via e-mail. Easy peasy. So I got all worried about it for nothing. :-p

I spent most of this afternoon tweaking my Gnomesby terrain and having a heck of a time with it. I swear I spent three hours just trying to get my bridge to look right. (It’s flat now, thanks to the Bridge Height Mod for SimCity 4. Yay!) I also smoothed some of the peaks since I didn’t really want Gnomesby to be mountainous, just hilly. Another thing I wanted was the ability to put some beach lots in my “campground” area, so I worked on that and finally had some success. And I added/rearranged some roads. Here is the result:

I added some trees and rocks for flavor but I don’t know how much of it will stick around. We shall see.

You may notice a lone lot near the center of the pic — it’s the first house in Gnomesby! Yep, once I got the terrain set up to my satisfaction, I plunged into building a home for the Cliffes. It’s a little fancy for a young college professor, but as he’s also a writer, maybe he got lucky and penned a bestseller. I mean, he does have a cat named Lucky, so anything could happen, right? 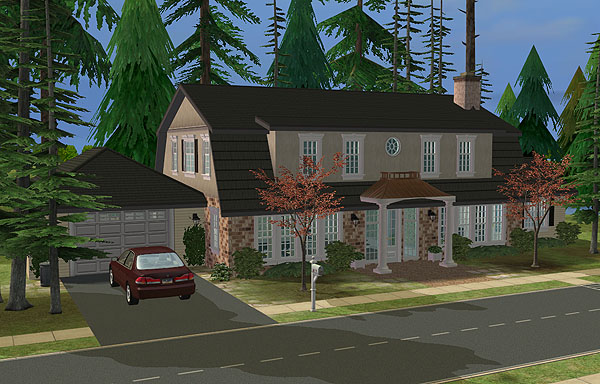 I haven’t finished decorating the inside yet, since I ran into some CC that is crashing my game. Wheee. So now I’m moving things out bit by bit in order to find the culprit. I did do a little work in the dining room, however, so here’s a preview: 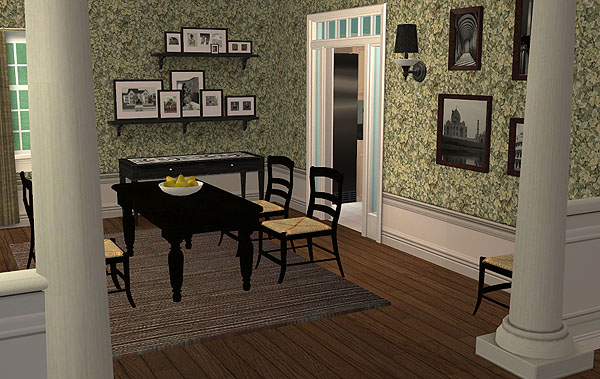 So Gnomesby is finally taking off!

One more thing — I’m working on a Credits page as well. Until that’s up and running, feel free to ask me where I got stuff. I haven’t posted many pics yet, so it shouldn’t be too hard for me to track things down.