I wasnâ€™t kidding last time when I called our house the loony bin. This house is a bin if I ever saw one, and we are the loonies. LOO-NIES. I could give you more evidence of that, but first I want to tell you all about my completely weird job.

After my phone conversation with Joel, a very sad and very decrepit carpool car picked me up from the loony bin, drove me out into the country, and deposited me in front of this hulking yellow villa that seemed to rise up out of nowhere.

I wandered towards what I hoped was the â€œofficeâ€ entrance of the house, but I wasn’t sure, because there weren’t any signs anywhere. I mean, how do you choose between two front doors? Thankfully, I picked the right one. (Hey, thereâ€™s a first time for everything.) 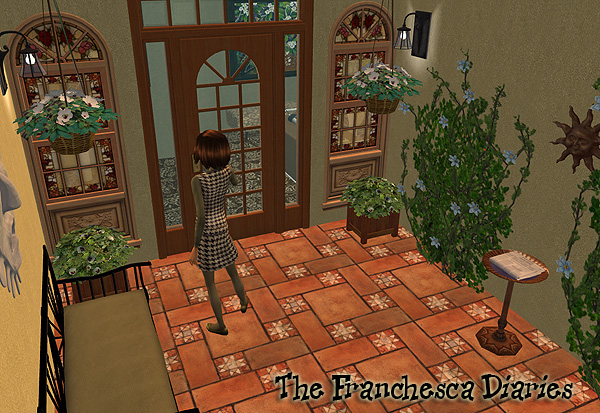 I walked in, expecting the ambassador herself to be sitting thereâ€¦um, ambassadingâ€¦but instead I saw a man in a spiffy suit. He was tap-tapping away on his keyboard, completely oblivious to my presence. 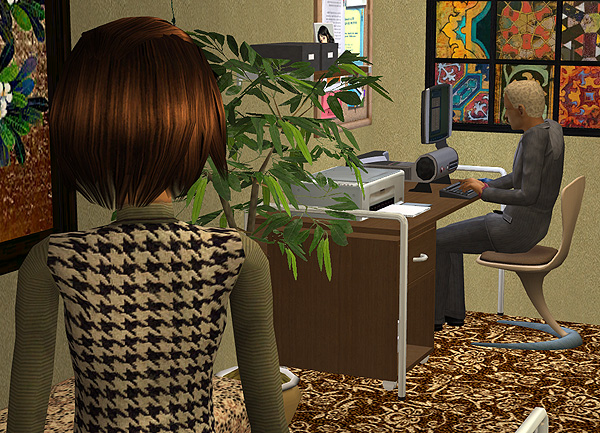 I had to resort to the dreaded â€œahemâ€ and â€œexcuse me, butâ€¦â€ in order to get his attention. He glanced at me as if I were a bug crawling on the carpet.

He rose and strode towards me, his perfectly-sculpted eyebrows climbing into his hairline. â€œAh, yes. Well. My name is David Alphonse-Rubio, and I am Ms. Ambassadorâ€™s assistant. Youâ€™ll be taking direction from me unless Ms. Ambassador has a particular task for you to complete.â€ 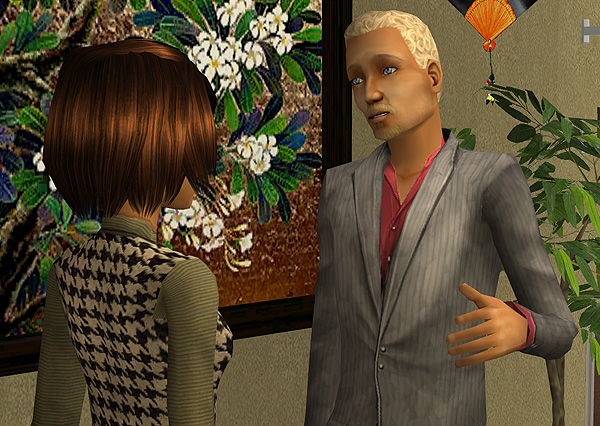 I looked to my right and spied Ms. Ambassador through a set of glass doors, tap-tapping away at her keyboard. Apparently thereâ€™s a lot of tap-tapping going on in the world of diplomacy.

â€œNow, I have quite a lot of work to do,â€ said Mr. David Alphonse-Rubio, making a slight grimace at my houndstooth jumper, â€œso it would help me greatly if you would prepare a cup of coffee for Ms. Ambassador and take her poodle Pumpernickel for a walk. Youâ€™ll find both coffee and poodle through that door. And whatever you do, donâ€™t talk to the boy.â€

â€œMs. Ambassadorâ€™s son. Try to ignore him as much as humanly possible.â€

Mr. Whatsisface returned to his desk and resumed his purposeful tap-tapping. I think I must have stood there gawping for a good 20 seconds before I fully digested what he had told me. I was suppose to ignore Ms. Ambassadorâ€™s son? Is that what diplomats do, ignore people? Good gravy.

Entering the very classy kitchen (my mom would LOVE it), I saw The Boy. He was eating what looked like a slab of charcoal. He was my roughly my age, maybe a few days younger. 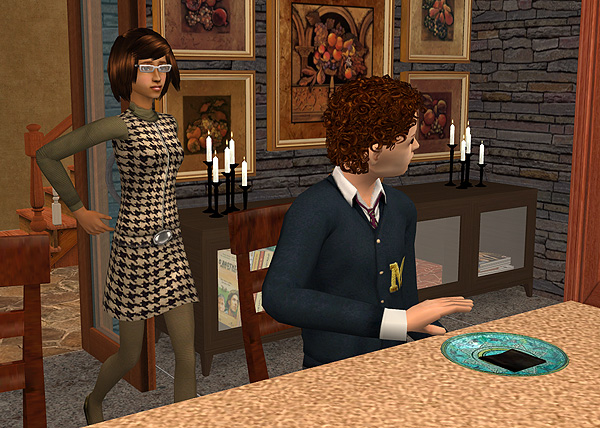 I did my best to walk right past without so much as a glance. It was actually pretty easy â€“ I just pretended he was Rico and that I was mad at him.

Nevertheless, he spoke to me through a mouthful of scorched toaster pastry.

â€œHey, you must be the new girl. Iâ€™m Thatcher. I go to Middlemount.â€

Middlemountâ€¦Iâ€™d heard of it. Itâ€™s one of those fancy-shmancy private schools. I was intrigued, but I continued to ignore him. The last thing I wanted to do was incur the wrath of David Alphonse-Rubio or Ms. Ambassador my first day on the job. 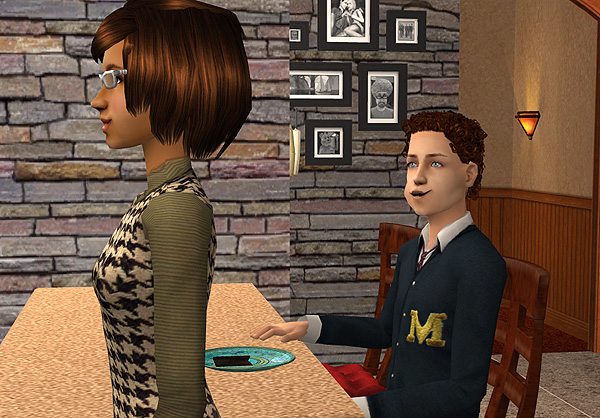 Thatcher didnâ€™t seem to care that I wasnâ€™t saying anything. He just went right on talking while I made the coffee.

â€œThatâ€™s a nice dress. Kind of retro. Do you like old music? I bet you do. You look like youâ€™d be cool that way. I collect old record albums. My mom does, too, but she never listens to â€˜em. Guess what? I have one of the original Paradimes albums from way back. Itâ€™s in good condition, too. My mom used to be a huuuge Paradimes fan when she was a kid. She has a piece of the bedsheets that Danny Paradime slept in when he stayed at the Fedoria Hotel.”

Under any other circumstances, I would have bounded up to this kid and said, â€œOhmygosh! I love the Paradimes! Blah blah blah blah BLAH!â€ and we would have gabbed for a million years about old music and junk like that. But I stood firm and kept my eyes fixed on the coffeemaker. 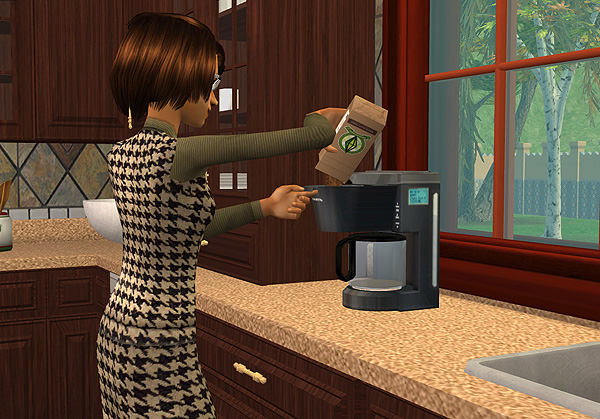 â€œHave you ever been to Fedoria?â€ he continued. â€œItâ€™s in the mountains, and they still have a King and Queen. And a princess, too. Iâ€™ve heard that they keep her locked up all the time and only let her out to go skating on their private ice rink. I wonder why they keep her locked up. Do you think she’s a little wacked out? Or are her parents just over-protective? I have my own theories…”

The coffeemaker dinged, and I removed the mug of steaming java. I pretended I didnâ€™t want to hear anything about a princess who is kept locked up, even though I was dying to ask him about it. As I passed by he finally stopped talking and just stared forlornly into space. I felt bad. 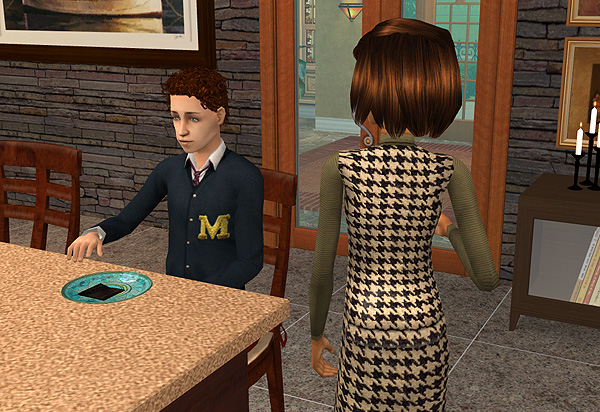 â€œSorry,â€ I whispered, booking out of there as quickly as I could without spilling the coffee.

David Alphonse-Rubio didnâ€™t even look at me as I breezed by on my way to Dellaâ€™s office. He seemed to be very intent on what he was typing. I hoped I wasnâ€™t in trouble already.

â€œYou can put the coffee on the desk,â€ Ms. Ambassador said as I opened the door. She glanced over for a moment, ran her dark eyes disapprovingly over me, and turned her attention back to whatever spectacularly important thing seemed to be happening on her computer screen. 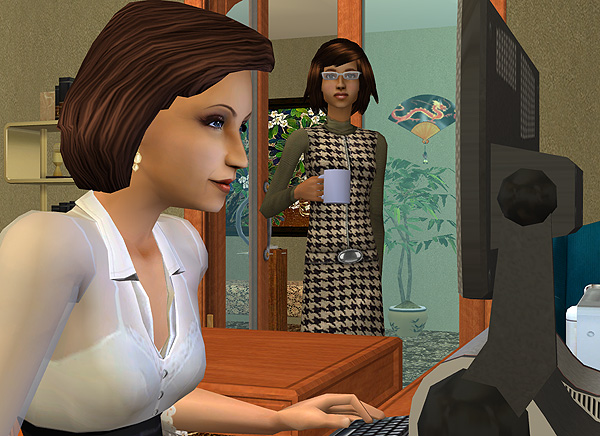 â€œWould you please fill Pumpernickelâ€™s food dish when you return from your walk?â€ she asked, not looking at me. â€œAnd then youâ€™re dismissed for the day. Thank you.â€

I set the coffee down and stared at her, bewildered. Thatâ€™s all I was here for? To make coffee and walk the dog? Oh well. I guess itâ€™s an easy 72 Simoleons. But why couldnâ€™t Thatcher or that David dude do it? Why hire someone?

Even worseâ€¦why hire someone and NOT EVEN LOOK AT THEM? Come on, lady! Hellooooo! 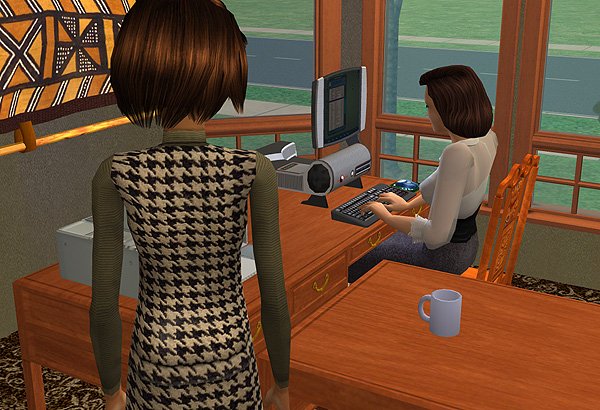 But she was too distracted. For a second I almost wished I had gotten the retirement home job instead. I bet those people talk to you, at least.

Well, Thatcher had talked to me. But I couldnâ€™t talk to him. What kind of messed-up-ness is that?

22 thoughts on “The Art of Diplomacy (Part II)”