The ceremony took place that very Saturday in the chapel downtown, just as Carol had anticipated. Only a few guests were invited â€“ the Braytons and the De Groffs made up the entirety of the assemblage â€“ but to Cecily it felt as grand as a wedding could be. The only dark spot was her feeling of dread upon seeing Max De Groff and his sister Elsie.

She knew that speaking to Max at some point during the course of the day was inevitable â€“ he was going to be at Brayton Hill later for the reception, too â€“ but she wanted to put it off for as long as possible. All week she had been pondering reasonable excuses for being outside of the Granville that night, but she hadnâ€™t yet thought of anything that didnâ€™t sound ridiculous. She needed more time. 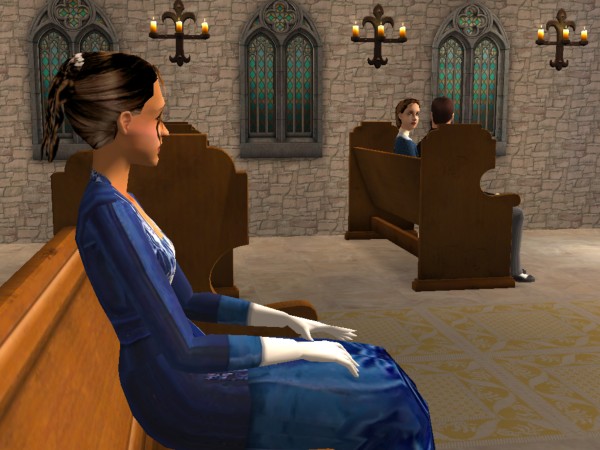 Her worried thoughts were overthrown as the ceremony began, and she grew excited again. Mayhew and Carol entered the chapel arm in arm and proceeded to the front of the room, where they stood facing each other, wreathed in candlelight.

At this point Harry turned to Arianna and whispered, â€œWhat are we going to do without her?â€ 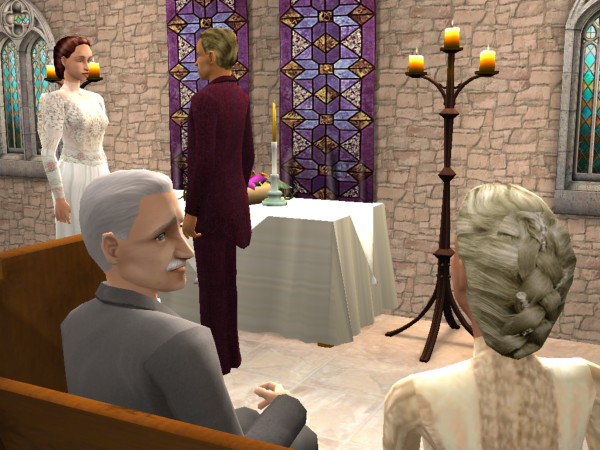 Upon hearing him, Cecily felt herself start to cry, but she held it in. She was brimming with joy for Carol, but it was touched with sadness â€“ surely the same sadness her father felt. What was she going to do without Carol? Carol’s new house was on the other side of town â€“ within walking distance, but not an easy walk â€“ and Cecily would no longer be able to see her dearest friend every day.

As Mayhew and Carol exchanged their vows, Cecily found her thoughts straying down a different yet much more familiar road â€“ she pictured herself in Carolâ€™s place and James in Mayhewâ€™s, and all of their family arrayed before them, the magnificent flowers, the sweet music, the promises of love until deathâ€¦

Mayhew wrapped his arms around his new wife and kissed her, and just like that, the ceremony was over. Carol was now Mrs. Mayhew Love. 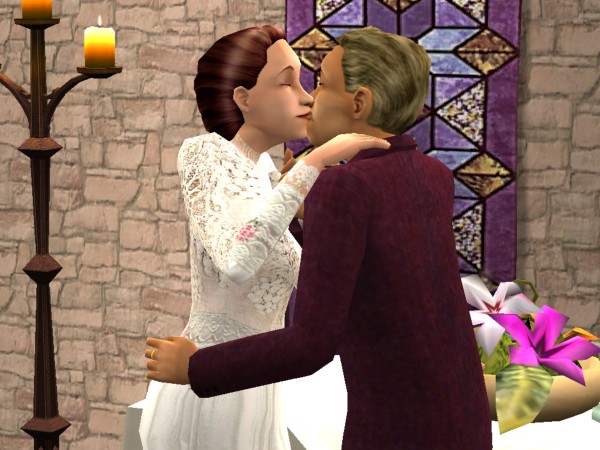 Without much fanfare, the Loves thanked their guests for attending the ceremony and headed out to a marvelous open-air carriage, complete with a haughty driver in livery, which De Groff had lent them for the day. The carriage whisked them off to their short photography session, which produced a lovely wedding picture. 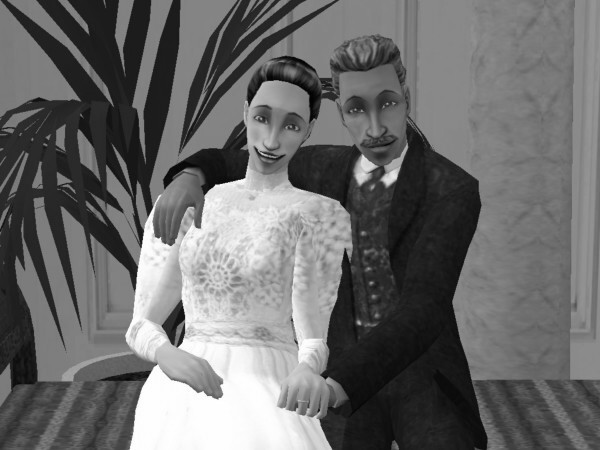 Afterwards they appeared at Brayton Hill, flushed and serene with happiness, as the Loves, De Groffs, and Braytons gathered in the dining room for a light dinner and celebratory punch. Cecily attended these proceedings but remained slightly detached from the group, feeling again that strange mingling of sadness and yearning and dread, and she fled the dining room as soon as she could, hoping no one would notice.

Unfortunately she only made it as far as the foyer before she heard a voice calling out to her. When she turned around, she saw Max De Groff strolling towards her, looking as dignified as ever with his smooth hair and neatly-groomed beard.

â€œMiss Brayton,â€ he said in his jovial manner. â€œI hope youâ€™re not leaving the party so soon. There was something I wanted to ask you.â€ 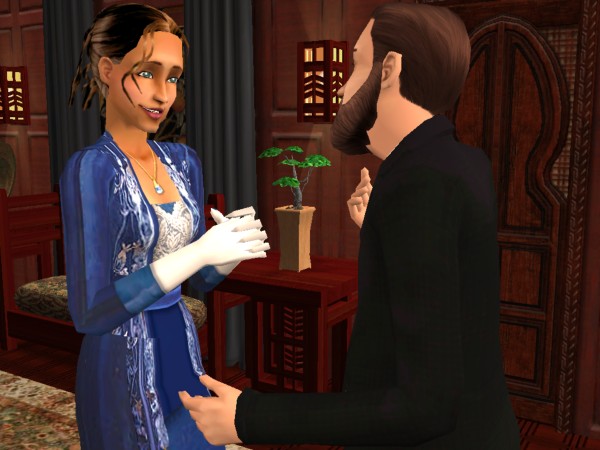 Cecily paused, putting on her best smile, though she felt like hiding beneath the rug. â€œI was just going to check on Paulina,” she said nervously. “Sometimes she wakes up from her afternoon nap early, and she hates to be alone for too long.â€

â€œDonâ€™t we all,â€ laughed Max, his eyes twinkling. â€œWell, I wonâ€™t keep you â€“ I simply wanted to know if youâ€™d be interested in having supper at our house Wednesday evening. Porter Guthrie will be there as my special guest, and I thought you might like to meet him.â€

Cecily had heard of Porter Guthrie, the painter â€“ he was known for his sensitive landscapes, beautiful use of color, and slightly old-fashioned style; in other words, he was just the kind of artist she most admired, and it made sense that Max, rather old-fashioned himself, would admire him, too. She must have looked hesitant, however, for Max continued:

â€œIâ€™m inviting Carol and Mayhew as well, and of course, my sister will be there.â€ He looked at her eagerly, but without expectation. 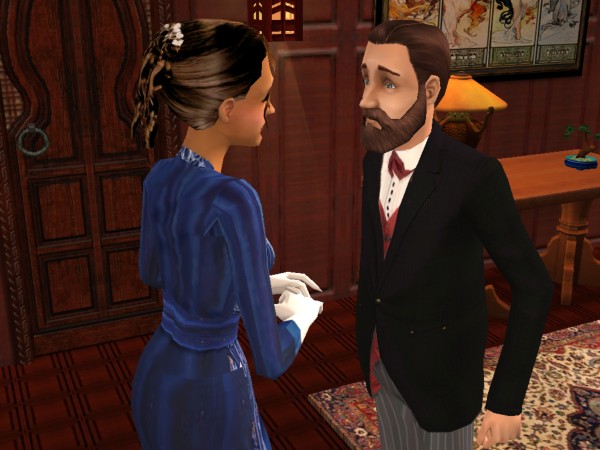 Cecily glanced down at her gloved hands. â€œI would very much like to, but Iâ€™m afraid I have a previous engagement for that evening.â€ She wasnâ€™t lying â€“ at least, she didnâ€™t think she was â€“ she thought she recalled James saying he would call on her that Wednesday. â€œBut thank you for the kind invitation.â€

Max nodded. A shadow of disappointment flickered across his face, but his lively spirits returned quickly afterwards. â€œWell, thatâ€™s a shame â€“ I saw your portrait of Arianna hanging in the drawing room, and I was quite impressed by it. Iâ€™m sure you and Guthrie would have a lot to talk about. But maybe next time.â€

â€œYes,â€ Cecily said, smiling faintly. â€œMaybe next time.â€ She wanted to turn and leave, but she didnâ€™t want to be impolite, so she simply stood there as if waiting for him to dismiss her.

Suddenly Max grew serious as he regarded her, and he stroked his beard a moment before speaking again, this time in a lower tone. â€œYou know, I hopeâ€¦due to certain circumstancesâ€¦that youâ€™re not afraid of me, Miss Brayton. I wouldnâ€™t want that.â€ 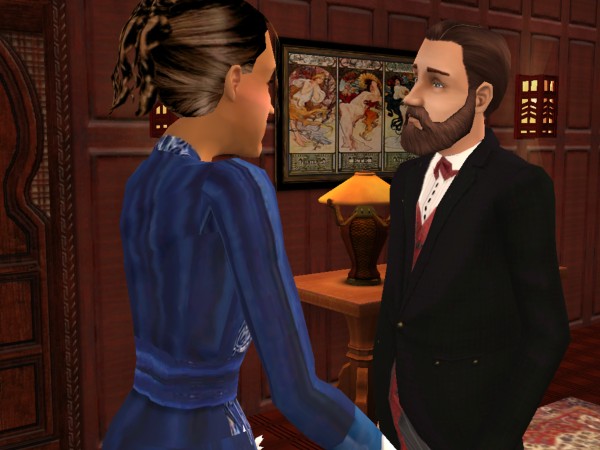 Cecily tried to maintain her poise. â€œWhat circumstances would those be?â€ she asked quietly, dreading the answer.

For a moment Max just stared, as if considering the best way to put things, then glanced behind him to make sure no one was there. â€œThat night I saw you downtown,â€ he said.

So he did recognize me, thought Cecily, her heart racing. She felt like a child who had been caught sneaking candy out of the dish before dinner â€“ only her crime had been much worse. All of the excuses she had considered crowded into her head, but none of them seemed sufficient.

Max noted her look of terror and smiled reassuringly. â€œI just want you to know Iâ€™m not going to say anything about it to anyone. As far as Iâ€™m concerned, I was half-drunk, and you could have been anyone. So you donâ€™t need to be afraid.â€

â€œYou were half-drunk?â€ Cecily asked stupidly, not knowing what else to say.

Max laughed. â€œI never drink,â€ he said dismissively. â€œBut no one needs to know that either, do they?â€ 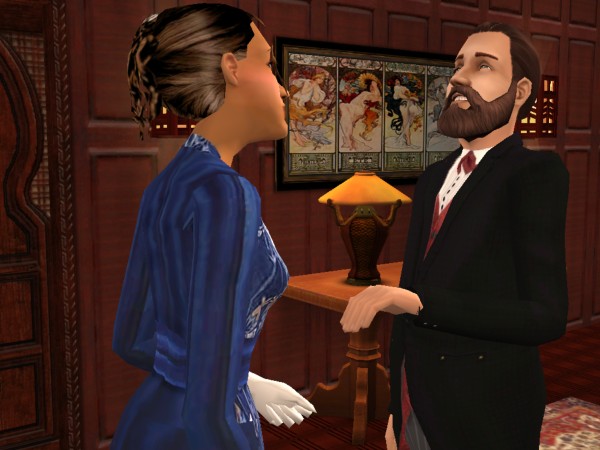 Cecily felt a weight being lifted from her shoulders, but just as it left, a new one settled there. Max had promised he wouldnâ€™t tell anyone about her fling at the Granville â€“ and from his secretive tone she knew that he knew what she had been doing there â€“ so was she now obligated to Max in some way? She felt like she owed him a favor, only she wasnâ€™t sure how to repay him. She hoped he didnâ€™t expect a certain kind of favorâ€¦no, it was too disgusting to think about.

â€œI guess not,â€ Cecily finally replied, trying to smile. â€œThank you, Mr. De Groff,â€ she said. She gave him a rather bewildered look of gratitude before turning and walking out of the room.

(NOTE: The Brayton Family stories can now be found in the “Annabel Island” category. Read the next post here.)