With the family safely ensconced in their new, ultra-secluded home (the address of which was made known only to the schoolbus driver, the grocery delivery guy, the mailman, the paperboy, the gardener, a few chaffeurs and a dozen assorted family friends), Mia Shanley could get back to doing what she did best: foiling the plots of SimNationâ€™s most detestable villains.

Upon realizing that she wasnâ€™t getting any younger, and that there would always be bad guys around, Mia decided to take on a sidekick to whom she could pass on her super-secrets. She put the following ad in the Sunday paper:

â€œGrammanator seeks capable and fearless cohort to assist in the fighting of crime. Apply at my super-secret hideout â€“ IF you can find itâ€¦â€

Within days, Mia had found a suitable sidekick: a young man by the name of Amadeo. Besides being frightfully handsome, Amadeo was fit as a fiddle, well-versed in the ways of villains (â€œIâ€™ve read all of Marcel Shanleyâ€™s crime novels,â€ he said with pride), and properly worshipful. 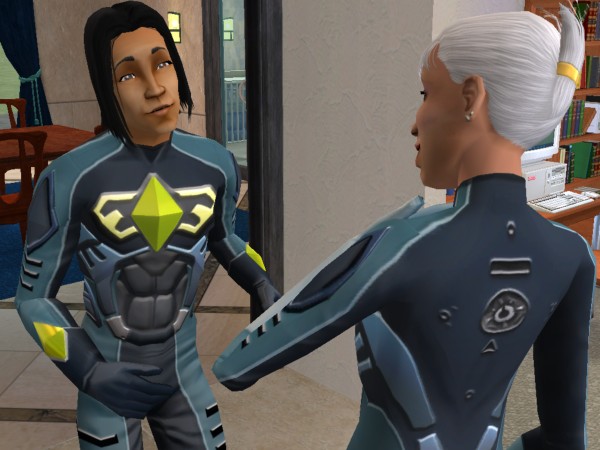 Mia was amused by Amadeoâ€™s adulation but didnâ€™t let it go to her head.

â€œDonâ€™t worry, youâ€™re hired!â€ she told the youth. â€œNow if youâ€™ll excuse me, I have a birthday party to attend.â€

Her baby granddaughter Ginger was about to become a toddler, and she didnâ€™t want to miss it. In fact, it was tradition for her to help the baby blow out the candles on the cake. Amadeo followed along like a puppy and observed the happy family ritual. 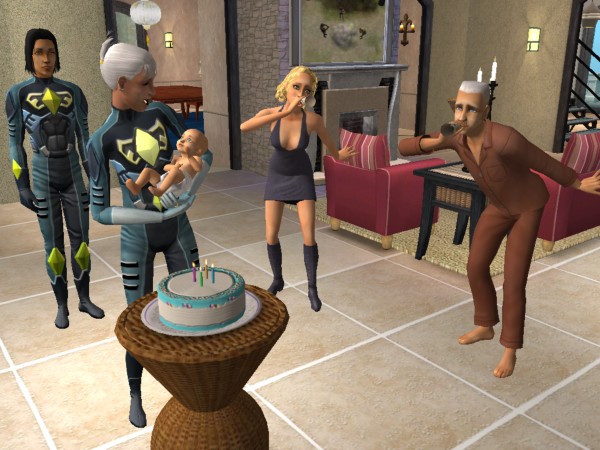 The next day, while Professor Day was teaching his smart-milk-enhanced daughter how to talk, Sierra came home in tears. Juan was nearby surfing the internet, but he paid no attention.

â€œWell, what on earth is the matter?â€ Thomas asked.

Sierra attempted to dry her eyes with her armbands but only succeeded in smudging her mascara.

â€œIâ€™ve been fired!â€ she cried. â€œThe Goobi Goombas wanted me to raise their village elder from the dead, but all I had was this funny sort of telephone I ordered late one night after watching an informercial. I didnâ€™t know if it would work â€“ I never had the chance to try it. But they insisted! So I summoned up the Grim Reaper, and what do you know? He asked me for money! I should have known it would be some scam. Well, the Goombas could only scrape together a few coins, so thatâ€™s what I offered the Reaper. He took it, laughing all the while, and then POOF! The village elder appeared, onlyâ€¦â€

Sierra paused and shuddered. Thomas looked anxiously between her and Ginger, hoping the child wasnâ€™t going to be scarred for life by this little story.

â€œHe came back as a ZOMBIE!â€ At this, Sierra began sobbing again. â€œThey fired me on the spot!â€ 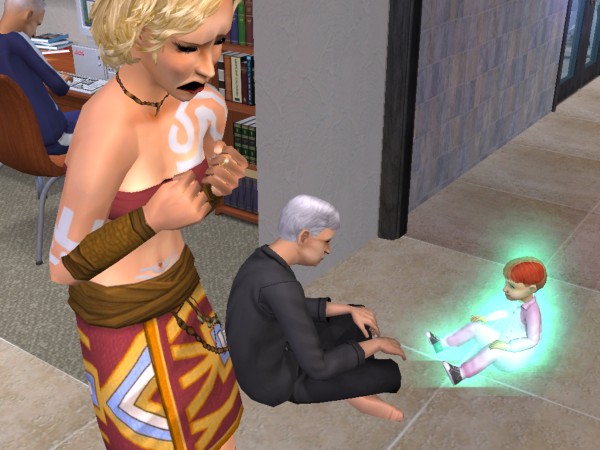 â€œGinger,â€ Thomas said to his daughter, â€œletâ€™s go play with your rabbit.â€

The orange-haired toddler complied and crawled off to the new nursery wing, sparing a glance at the crying lady in the beads and body paint. Thomas got her settled with the rabbit, pulling the bunnyâ€™s ear a few times to make Ginger laugh, then rushed off to comfort Sierra.

Ginger played away, oblivious to the strangeness of the family into which she had been born. 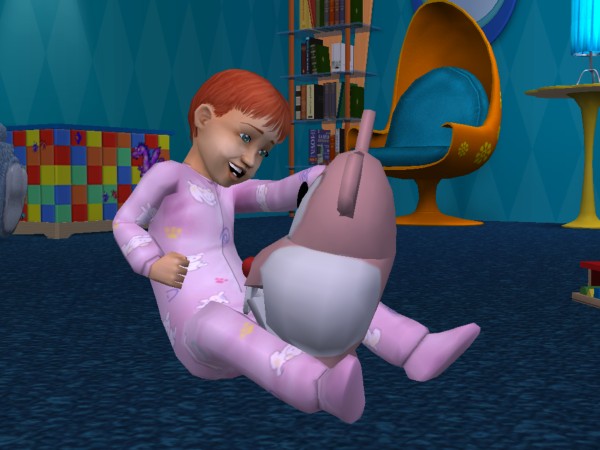 Later that evening, everything went back to normal â€“ well, relatively normal. Sierra washed off the body paint and smeary mascara, put on her pajamas, and spent some time entertaining her little daughter. 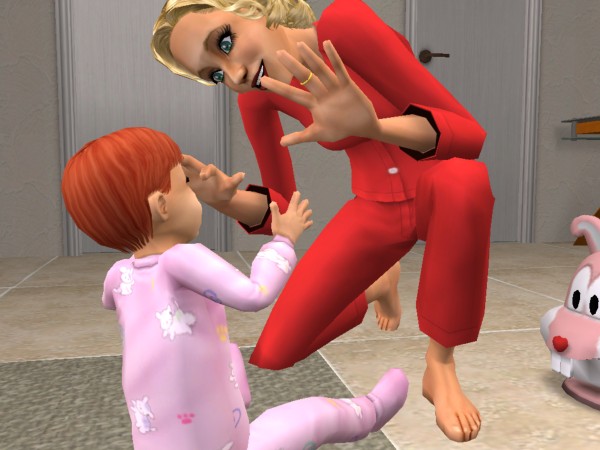 Delaney was having better luck than Sierra career-wise and returned home from work one night smiling contentedly â€“ she had been promoted to Visionary, the very top of the artistic heap. 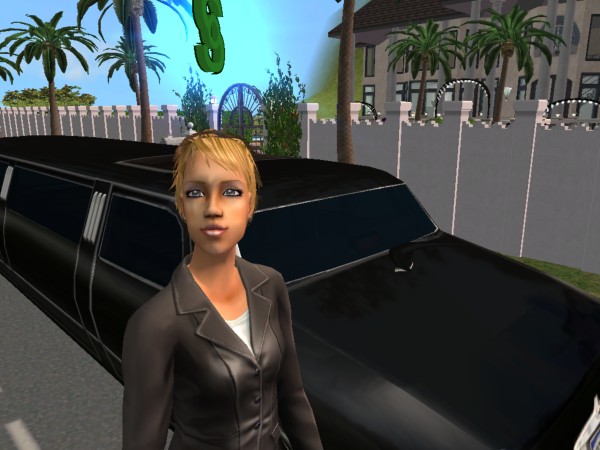 â€œI work 15 hours a week, make lots of moolah, ride in a limo, and sit around being artsy-fartsy all day. YES!â€

On this particular day, Delaney was met by her daughter Ruby, who had jubilantly raced out to greet her. 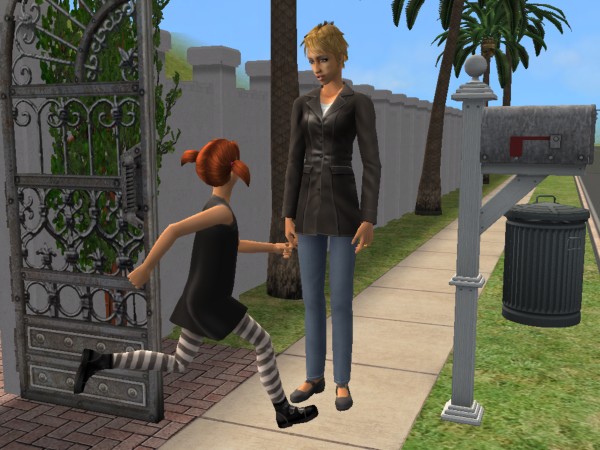 â€œWhat??â€ Delaney blinked, then let out an exasperated sigh and marched off toward the house.

It was true. At dinner that night, Juan told everyone else the news. 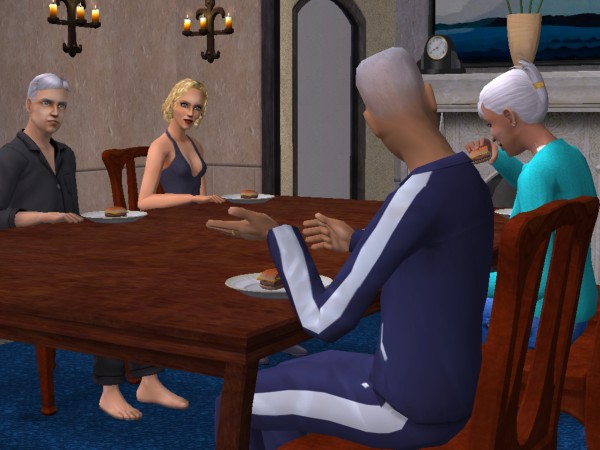 â€œI thought to myself, â€˜what does the world need right now? What is everyone longing for?â€™ And then it came to me in a blinding flash of light â€“ they want UTTER HUMILIATION!â€

Mia ignored him and concentrated on her meal, but Sierra and Thomas stared at him incredulously.

â€œSell it?â€ Juan laughed. â€œI expect people to live it! My publisher thinks itâ€™ll be a phenomenon. And they gave me a huge advance. Donâ€™t tell Marcel, but I think itâ€™s more than he ever got for those pulp novels of his.â€

Juan tore into his hamburger, completely oblivious to the ferocity of Sierraâ€™s glare.

â€œAnyway,â€ he continued with his mouth full of food, â€œI was thinking of having a pool party tomorrow night. To celebrate my grand entry into the world of literature.â€

Across the table, the professor nearly choked on his burger.