For the next two days, Cecily prepared and perfected her plan, considered all of the possible complications, and laid the necessary foundations for success. Around the house, she talked of feeling pent-up and wanting to get out, and mentioned a few friends who lived across town that she had thought about visiting. She asked Carol about her latest letter from Mayhew, which stated he would be gone for at least another week, and urged her into wistful reminiscences of their romantic encounters (though Carol refrained from going into too much detail). And while Carol was busy with her many chores around the house, Cecily went through her room â€“ carefully and thoroughly — until she found the one object she sought: a dull brass key etched with the number â€œ201â€.

As Cecily tucked the key in the folds of her dress and hurried off to her bedroom, she felt a mixture of exhiliration and guilt. She had never taken anything from anyone, and though she fully intended to return the key and didnâ€™t think it would be missed, the fact that she had to sneak around at all made her feel a bit wretched. But her vision of James proposing was so much more compelling — her future happiness hinged upon it! It must happen, and if she had to borrow Carolâ€™s key and Mayhewâ€™s hotel rooms for a little while in order to make it happen, then thatâ€™s what she would do.

It was another fine summer day when James returned from his business in Rivenberg. Having anticipated his arrival, Cecily had sent a letter â€“ not frilly or perfumed, but businesslike so as not to arouse suspicion â€“ and asked him to meet her that evening outside Jolliffâ€™s CafÃ©. A half hour before the appointed time, she told Carol she was walking downtown to meet friends and would get a ride back from them, and with the key resting safely in her pocket, set out down the street, the sunset blazing orange behind her.

Most people were in their houses at that hour, eating a late supper or playing cards, though a few strolled by, nodding courteously as they passed. Cecily was glad she didnâ€™t go out much, as everyone she encountered was a stranger to her and therefore posed no threat to her plan. When she reached Jolliffâ€™s CafÃ©, she saw James sitting on a bench outside of it, reading a paper in what little light the streetlamps and deepening dusk afforded. 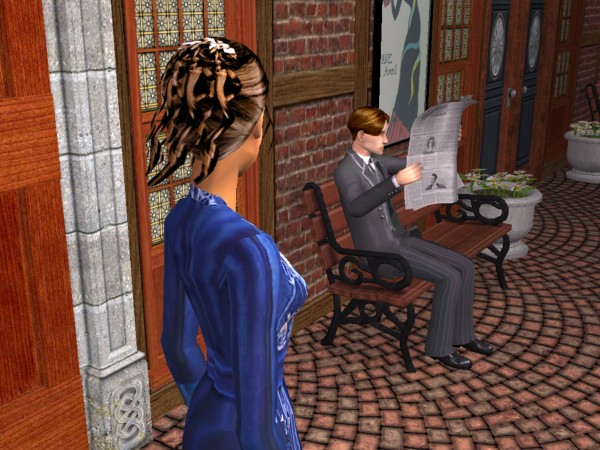 With a madly clamoring heart, Cecily sat down on the bench next to James and pretended to adjust her gloves. Spying her out of the corner of his eye, James smiled and started to fold up his paper.

â€œNo,â€ Cecily whispered, feeling a strange excitement in being so furtive. â€œWait until Iâ€™m in the Granville, then follow me. Room 201.â€

James stretched out his paper again with a snap. â€œWhat?â€ he asked incredulously, keeping his voice low. â€œI donâ€™t understand.â€

Cecily leaned over and fidgeted with the buckle of her shoe. â€œYou wanted us to be alone, didnâ€™t you?â€

James sputtered. â€œYes, butâ€¦I donâ€™tâ€¦Cecily, itâ€™s a hotel! You know what kinds of things go on in hotels, donâ€™t you?â€

Yes, utterly romantic things, thought Cecily as she continued to fuss with her shoe. But the answer she gave James was more pragmatic. â€œI know what goes on in this hotel. Room 201 is Mayhewâ€™s, and I have Carolâ€™s key. I thought we could borrow his drawing room for a little while, thatâ€™s all.â€

â€œArenâ€™t you worried?â€ he asked. â€œYour reputationâ€¦if anyone saw usâ€¦â€ Cecily glanced past the edge of the newspaper and saw his face reddening. â€œYou can trust me not to tarnish your honor, of course,â€ he added, sparing her a quick glance, â€œbut people will talk, and you know how that goes.â€ 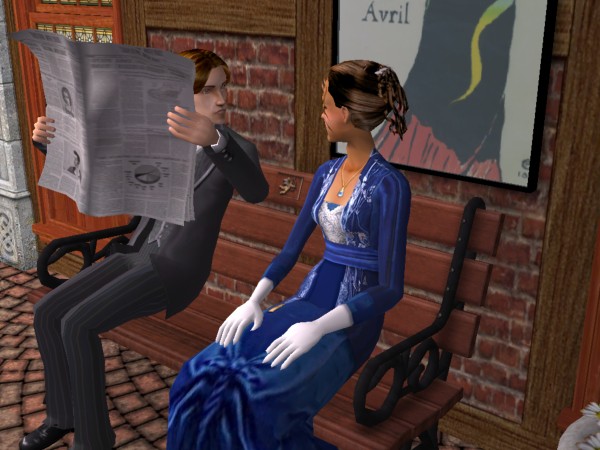 â€œOh, James, donâ€™t be so old-fashioned!â€ Cecily said, surprising herself. â€œWeâ€™re not doing anything wrong, are we?â€ As the words came out she realized she was echoing his exact phrase from a few days before, when she had been the reluctant party.

â€œNoâ€¦â€ James replied, though he didnâ€™t sound entirely convinced. â€œWell, if itâ€™s only for awhile.â€ He turned a page and pretended to continue reading. Cecily noticed the corners of the paper trembling just slightly and smiled to herself. Despite his protestations, it seemed he was just as thrilled at the prospect of being alone as she was. Her own excitement flaring, she rose from the bench and made her way discreetly towards the alley, where she knew there was a back door to the Granville Hotel.

13 thoughts on “The Overture”