Cecily was glad she had agreed to go to the De Groffs with Carol that evening â€“ she was in dire need of a distraction from what continued to be something of a dilemma, despite her best efforts.

Until James had appeared in the doorway of the study that afternoon, she had been certain of her love for Samuel â€“ but James had a way of disarming her, of making her feel all fluttery — though she couldnâ€™t say she loved him. Being with him was like spinning around and around into dizzyness and then trying to walk — it made her feel clumsy and lightheaded.

She tried to explain this much to Carol as they rode in the motorcar the De Groffs had sent to fetch them, but both women were unused to riding in such a vehicle, and they gave each other startled looks at every bump in the road.

Cecily didnâ€™t know what to expect at the De Groffsâ€™ house. She had been so preoccupied with thoughts of the Haddaway boys that she hadnâ€™t given it much thought. So it was with a pleasant sort of jolt that she entered the De Groff foyer and found it cozily familiar. The walls, the paintings, the furniture â€“ everything was elegant, old-fashioned, and just a touch exotic. It reminded her of the old Brayton Hill, before her father had become obsessed with the idea of building something â€œmodernâ€.

Mayhew descended the stair to meet them, and as he and Carol reunited happily, Cecily followed the maid into the dining room.

â€œMake yourself comfortable,â€ she said, her voice heavy with an accent Cecily couldnâ€™t place. â€œYour hosts will be down shortly.â€ With that, she retreated to the kitchen, presumably to finish preparing the feast.

Cecily wandered around the dining room, entranced by the beautiful things it held. She saw at least one sculpture that took her breath away while shocking her at the same time â€“ 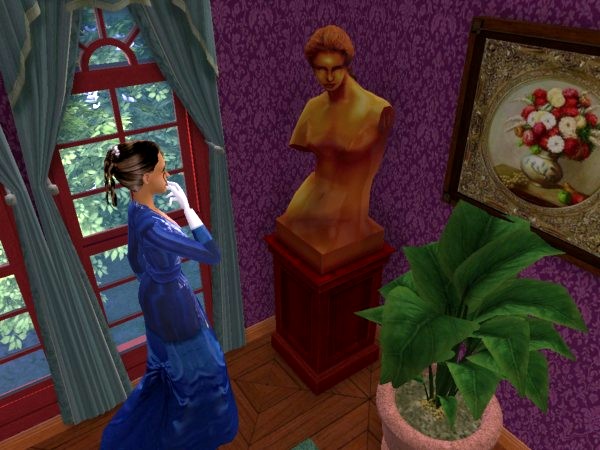 — and at least one painting that made her feel remotely wistful, as if she were dreaming about something wonderful and sad that happened a long time ago.

It made her suddenly want to paint, and she wished she could call for the motorcar and ride home to her canvas, but a voice jarred her from this vision, and she turned to see the face of her host, Max De Groff.

â€œDoes it remind you of anyone?â€ he asked, and when she gave him a puzzled look, he nodded towards the painting.

Cecily wasnâ€™t sure how to respond. Was it supposed to remind her of someone? She couldnâ€™t really make out a faceâ€¦

â€œIt reminds me of my mother,â€ her host offered then, staring at the painting in the same wistful way that Cecily had been. He gave a chuckle, and said, â€œI donâ€™t know why â€“ I never saw her in all my life. Well, not with eyes that remember,â€ he added, chuckling again. His kind expression and warm laugh made Cecily feel at ease.

â€œIâ€™ve only seen my mother in old photographs,â€ she said with a faint smile. She didnâ€™t feel it necessary to say anything about her motherâ€™s ghost, though she imagined that Mr. De Groff would be intrigued by it. 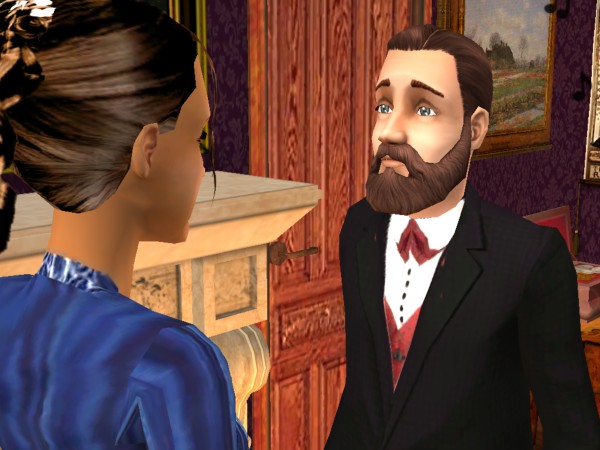 â€œI bet she was very beautiful,â€ he said, not leeringly, but with a polite sincerity.

Instead of blushing as she normally did when people â€“ however indirectly â€“ referred to her beauty, Cecily beamed almost proudly.

â€œShe was,â€ she replied, then added, â€œThank you, Mr. De Groff,â€ feeling that his courtesy should receive courtesy in kind.

â€œYou may call me Max,â€ he said with a twinkling smile. Cecily returned the smile just as Carol and Mayhew entered the room.

â€œI see youâ€™ve met old Max,â€ Mayhew said, sidling up to them. â€œMake sure you get a slab of the salmon before he eats the whole platter.â€

Cecily raised her brows, shocked that Mayhew would be so insulting towards his employer and gracious host, but Maxâ€™s mirthful half-laugh diffused her astonishment. He turned back to her with a look of mock seriousness.

â€œIf you will excuse me,â€ he said, tugging on his suitcoat. â€œI must go and toss my esteemed architect into the street.â€

After more exchanges of this nature mingled with the kind of conversation one only hears among very good friends, the cheerful gathering settled down to dinner. It was then that Maxâ€™s sister, Elsie, finally joined them, and as she sat queenlike at the head of the table and surveyed her guests, a kind of hush fell over the room. 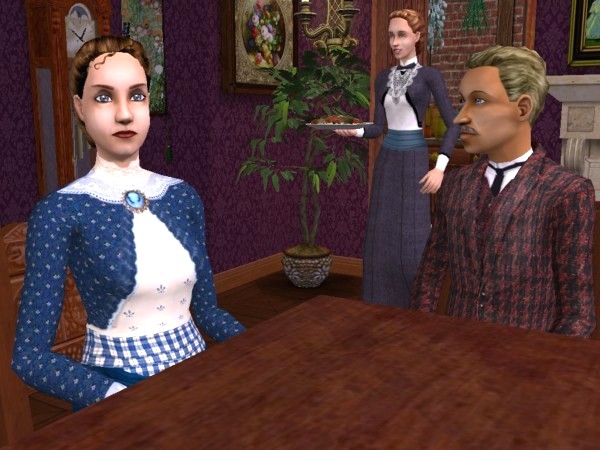 Cecily became aware of the loud ticking of the grandfather clock as they waited for their food to be served. Max broke the silence to introduce Cecily to Elsie, and Elsie gave Cecily a cordial nod of her head, but after that, everyone was quiet again. Even Mayhew and Carol spoke only with their eyes, exchanging glances of longing while the maid served everyone a magnificent plate of salmon. 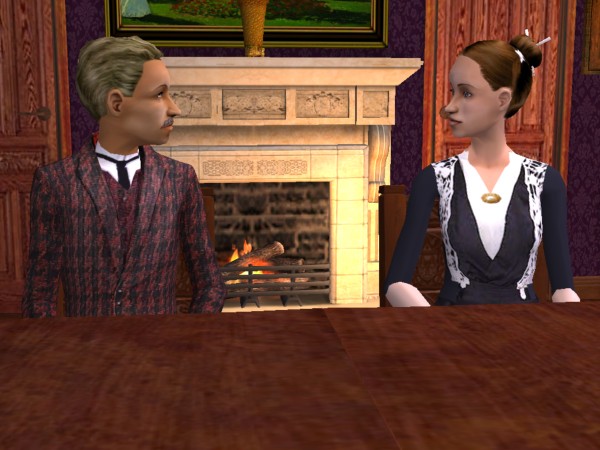 After several minutes of nothing but the clock ticking and forks scraping along fine china, Cecily spoke up.

â€œMiss De Groff,â€ she ventured, â€œyou and your brother keep such a beautiful house. Itâ€™s soâ€¦enchanting.â€ Cecily inwardly groaned at herself. She hadnâ€™t planned on phrasing it that way and hoped Elsie wouldnâ€™t take offense. She seemed like the type to take offense at almost anything.

â€œYou donâ€™t think it old-fashioned?â€ Elsie asked between bites of salmon. Cecily couldnâ€™t help but feel this was a trick question.

â€œItâ€™s old-fashioned in the best sense,â€ she responded cautiously. Elsie stopped chewing and stared at her. Cecily continued quickly, â€œI think everyoneâ€™s in such a rage to be modern and fashionable that they leave behind some things that are truly worthwhile.â€ 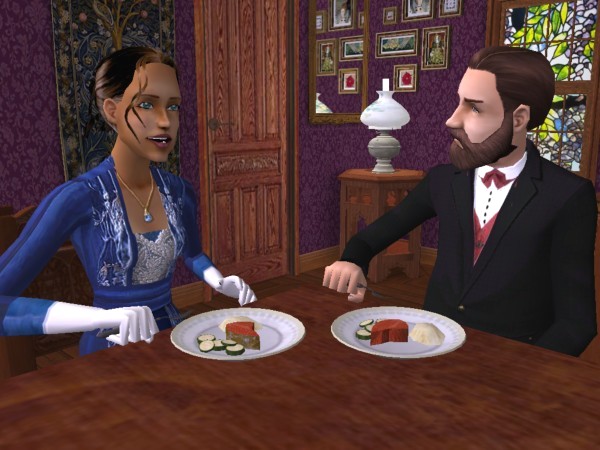 Both Max and Elsie seemed to approve of this answer â€“ Max by his good-natured smile, and Elsie by a slow nod of agreement, as though she were absorbing Cecilyâ€™s words syllable by syllable.

â€œDo you include your father in that bunch?â€ she asked then, not sounding malicious, but simply curious.

Cecily thought about that. â€œSometimes. Our house is very comfortable, I must admit, but it does look a little odd, doesnâ€™t it?â€ She didnâ€™t know if she really felt that way or if she was just parroting what most of the townsfolk had been saying over the past year. She looked at Mayhew apologetically, and he shrugged, as if he understood.

Max released another one of his heartfelt laughs. â€œI suppose itâ€™s a bit on the odd side, but thatâ€™s exactly whatâ€™s grand about it. Thatâ€™s why I hired this lad here to design my new hotel. Of course itâ€™s going to be old-fashioned as can be, but Mayhew understands that. What I want is someone with vision. Your father and Mayhew have that in spades.â€

Someone like Mr. De Groff saying her father had â€œvisionâ€ made Cecily feel proud again, and she bestowed him with a grateful smile.

All in all, it was a pleasanter evening than Cecily had expected, with the added bonus of making her forget about the Haddaways for a good hour or two, and as she watched Carol and Mayhew bid each other farewell, she felt a contentment she hadnâ€™t felt in ages. They seemed to be truly in love. 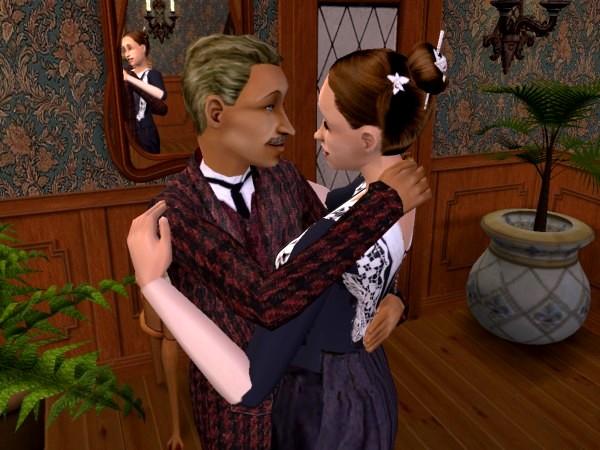 Carol cried the whole way home, though Cecily was able to convince her that three weeks wasnâ€™t really that long, and Mayhew would be home before she knew it. By the time they reached the front door of Brayton Hill, Carol was smiling, and Cecily went to bed that night with a renewed sense of purpose.