As Cecily lay in the darkness, the humid night air riding through the window on an incessant flood of cricket song, she pictured James standing before her, his form perfect, his smile charming, his eyes penetrating hers in that unsettling way. Then his warm brown eyes became a cool blue, and Samuel was there, leaning forward, about to kiss her â€“

Cecily sat up in bed. The humidity and the crickets and the Haddaway boys were all conspiring against her in her quest for sleep. Thus defeated, she crept across the room and down the stairs. The house was dark but for the moonlight shining through the windows in the living room, accompanied by the glow from the fireplace, where a few embers still seethed. A delicious crosswind from the opened windows cooled the room, making it much more pleasant than her stuffy bedchamber.

Settling into the sofa by the windows, she wondered idly when her father was going to finish the sleeping porches. The heat of May Green summers could be oppressive, and Mayhewâ€™s plans for second-story porches had taken that into account, but Harry hadnâ€™t the funds to build them yet. Cecily sighed. Why was she musing over such mundane concerns, when she had a genuine dilemma staring her in the face? Perhaps she wasnâ€™t ready to stare back just yet.

After several more minutes of avoiding, Cecily felt herself grow chilly. Something was gnawing at her, something besides the question of the Haddaway boys, but she couldnâ€™t quite figure it out. Rubbing her arms vigorously, she stood and went to the fireplace, where she prodded the faintly glowing logs into a feeble blaze.

Cecily lowered herself into the chaise by the fire, but as she did so, her arms went wild with goosebumps, and an all-too-familiar feeling of dread passed over her. 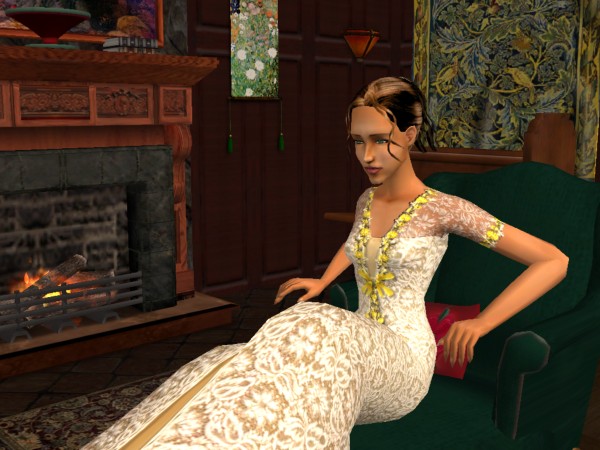 Her motherâ€™s ghost was haunting that night â€“ she knew it. Cecily froze in place, wondering where the ghost might be â€“ was it in the room with her? Was it outside? Wherever the phantom was, it was drawing nearer, and Cecily feared the moment she would meet it. In a sudden rush she put out the fire and dashed towards the stairs, groping in the dark for the railing.

Cecily had felt the presence of her motherâ€™s ghost many times throughout her the course of her life, but the occasions on which she met the spectre face-to-face were quite rare. Those encounters usually left her in shivering sobs that exhausted her so much she fell into a deep sleep â€“ a sleep fraught with mournful dreams and half-remembered glimpses of the past.

She was in no mood for such an encounter tonight â€“ it was the very last thing she needed. It was always the last thing she needed; why did her mother pick on her so? Or her motherâ€™s ghost, rather â€“ Cecily had long stopped believing the phantom was really her mother. She thought of it as residue, a mere shadow â€“ it was no more April Brayton than a recording played on a gramophone was an actual voice.

Once Cecily was up the stairs, her dread subsided, and she felt warm and refreshed, as though she had stepped out of an icebox into a warm summer night. It had been a close call â€“ she was sure the ghost had been looking for her, though she didnâ€™t know why. She felt safe in her room â€“ she had never felt the ghostâ€™s presence upstairs â€“ and so with her heart beating wildly in her chest, she lay back down and tried to sleep.

Her last thought before she finally drifted off was: I wish I could tell Samuel about this. Heâ€™d understand.

That thought was still on Cecilyâ€™s mind when she awoke the next morning â€“ it had lain there on the forefront of her thoughts, ready to pounce. She suddenly wanted to talk to Samuel, and she wanted to tell him everything â€“ about the party, about James, about her motherâ€™s ghost â€“ but most of all she wanted to tell him that she loved him, that she had ever since he kissed her that day, and that James â€“ well, he had been something of a spectre over the years, haunting her almost as much as her motherâ€™s spirit had. If Jamesâ€™s spectre had suddenly manifested and lured her into some fantasy world, it didnâ€™t matter â€“ Samuel was real, and always had been, and though Cecily was an idealist at heart, she preferred to have the real man over the fantasy one.

All of these realizations came to her in a rush as she went through her morning routine. By the time she descended for breakfast, she was in a blissful, eager state, so chipper that her father looked at her quizzically and asked her if she was feeling well.

â€œThat must have been some ripping good party,â€ he said with a chortle as he lifted a glass of juice to his lips.

â€œIt was,â€ Cecily said. â€œI think Iâ€™ll call on the Haddaways this morning and thank them for it.â€ She smiled up at Carol, who was just then placing a steaming bowl of oatmeal before her. Carol returned her smile with a knowing wink and hurried off to fetch more juice for Harry.

Cecilyâ€™s ebullient mood carried her through the rest of the morning and up to the moment she reached the front door of Haddaway Hall. Already the scene of last nightâ€™s dalliance with James had begun to fade from her mind like a vivid dream one forgets upon waking.

She rang the bell and waited, expecting Mr. Leverton the butler to open the door, but Dorothy Haddaway opened it instead and, with a merry greeting and grasping of hands, invited her in. 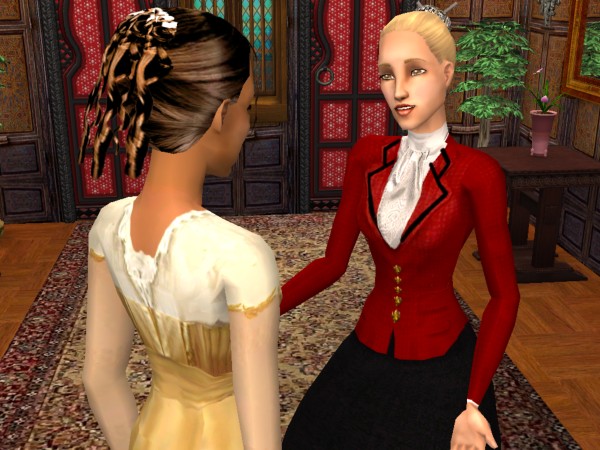 â€œI was just about to go riding,â€ Dorothy said apologetically, glancing down at her sharp red jacket, â€œBut I could stay a few minutes if you like, and Miss Carwell could bring us some tea. I should so much like to hear what you thought of my party last night. Did you not adore the musicians? The droopy-looking violinist nearly brought my father to tears! He said the song reminded him of his mother. Poor Grandmother! Over there all alone, though Iâ€™m sure sheâ€™s made a friend here and there â€“â€œ

Cecily broke in as soon as there was a gap in Dorothyâ€™s speech. â€œOh, I really canâ€™t stay long,â€ she said as Dorothy signalled to the maid. â€œI just wanted to thank you for inviting me to the party last night. It really was magnificent.â€

â€œWell, I know I havenâ€™t always been the kindest friend, Cecily, and I wanted to be neighborly, you know, and then my brother was so curious to see you again after all this timeâ€¦â€ At this, Dorothy covered her mouth and giggled in a surprisingly childlike fashion. â€œOh, donâ€™t tell him I said that,â€ she added, waving a hand. â€œHeâ€™ll absolutely murder me.â€

Cecily knew she was talking about James, but she couldnâ€™t help imagining it had been Samuel. Her mind followed that heavenly path for a moment before steering itself back on course. Now that the brothers had been brought up, she had her opening, but she had to act quickly; Dorothy was about to launch into another monologue.

â€œAre they home, your brothers?â€ she asked, as Dorothy clamped her mouth shut. 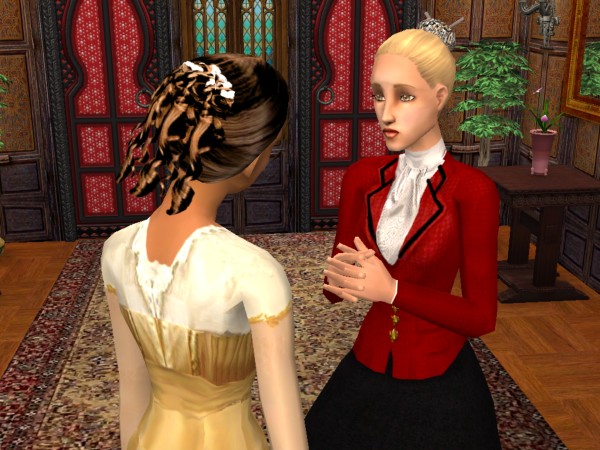 â€œMy brothers?â€ she asked absently. â€œI believe James has gone to town for the morning, but heâ€™ll be back soon.â€ She smiled in a sly manner that made Cecily impatient.

â€œAnd Samuel?â€ Cecily asked, which caused Dorothy to raise her eyebrows in surprise.

â€œSamuel? Whatever do you want Samuel for?â€ she laughed, dismissing him with a flick of her hand. Cecily nearly winced; if Dorothy thought she cared so little for Samuel, what must Samuel himself think, especially after Cecily neglected to speak to him at the party last night? As far as any of the Haddaways knew, she had always been in love with James, and her actions last night hadnâ€™t done anything to make them believe differently.

Still, it didnâ€™t feel right pouring her heart out to Dorothy â€“ their friendship wasnâ€™t on that level yet — so she put on an air of indifference, and said, â€œOh, I was just wondering. I barely saw him at the party last night.â€

Dorothy sighed. â€œWe all barely saw him. Well, except for Josephine. You know,â€ she said with a chuckle, â€œHeâ€™s been at Brynmor nearly every day since she returned from her travels abroad.â€

Impatience got the best of Cecily again. â€œIs that where he is? With the Lloyds?â€

Dorothy arched a brow curiously. â€œNo â€“ heâ€™s with father today. They had business in Rivenberg. They wonâ€™t be home until tomorrow, most likely. But I can tell him you called on him, if you like?â€ A tinge of cunning â€“ or was it malevolence? — crept into her otherwise friendly tone.

Cecily reddened. â€œOh, I wasnâ€™t calling on him,â€ she said. â€œIt was just so nice to see all of you last night. It made me a little nostalgic.â€ She eased into a nonchalant smile. â€œBut Iâ€™ll let you get back to your riding. Itâ€™s a fine day for it.â€

â€œGood-bye,â€ Dorothy said, showing her out the door. â€œDo call on us again sometime.â€