Good morning, dears! Maude here with an update on the unfortunate Kilman family. Last we left them, Joey Kilman had gotten engaged to Bailey Singleton and moved back into the old trailer house with his sister, Tiffy. As promised, he gave up his life of crime and got a job at a car wash in Sim City — at least, that’s what he said he did… 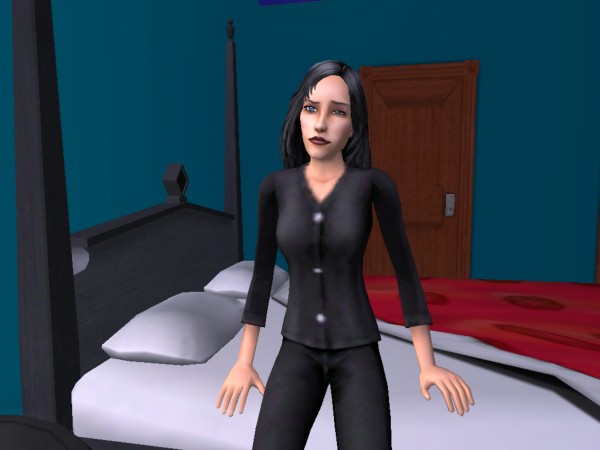 I was simply hanging around the Kilman Trailer one night, floating from room to room, when I heard a noise like someone rattling a door. It wasn’t too terribly loud, but for some reason it made Tiffy sit straight up in bed! Her eyes widened as she glanced around the room.

For a moment I thought she saw me, but she was looking through me at the door. Listening for more noise, she quietly swung around to the edge of the bed.

Light, deliberate footsteps sounded in the hallway behind me. Someone was definitely sneaking around out there and not doing a very good job of it! Tiffy jumped to her feet and went to the door, pausing a moment before flinging it open. 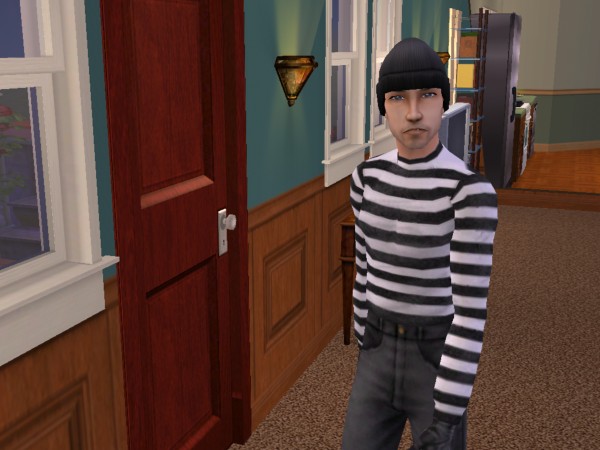 She flipped on the hallway light and let out a little shriek.

“Good god, Joey! You scared the living daylights out of me. I thought you were a burglar.”

“Oh,” Tiffy said finally. “I see.” A long, awkward pause passed before she spoke again. “Can we talk outside for a minute? I need a drink.”

Joey let out a sigh of resignation and followed her out onto the new deck. Behind the bar, Tiffy filled a tumbler full of something neon green and took a swig. She offered some to Joey.

“No thanks. What are we doing out here?” Joey glanced uneasily towards his father’s headstone, just a few yards away from the edge of the deck.

“Joey, I thought we had an understanding.”

“About your chosen occupation! You’re going to end up in jail…or worse! I don’t like it. What happened to the car wash?”

Joey shrugged. “It didn’t pay enough. Look, I can make way more money doing this, and it’s not that hard to keep from getting caught.”

“What, the black and white stripes don’t give you away?”

“I’m good at it, Tiff. Mr. Valentine has plans for me. He thinks I’ll make it really far –”

“He owns a lot more than just slums. He’s one of the richest men in Sim City.”

Tiffy scowled. “Joey, I can’t believe what you’ve gotten yourself into! Mom and Dad moved OUT of the city so we wouldn’t have to deal with stuff like that. They wanted a better life for us. What would Dad say if he could see you now?”

Disgusted, she shook her head and stalked back into the trailer. She had to get up early for work and needed her sleep. Joey lingered outside for a few minutes, pacing the deck, until a chilly gust of wind swept through the yard and coaxed him back into the house.

Tiffy had to get up before dawn for her new job as an Intern at the Mt. Geneva Clinic. She didn’t sleep very well and seemed to be in a bit of a funk as she stood outside waiting for her carpool. I hovered next to her, just enjoying the deep blue of the sky, when I felt a strange presence nearby. I turned and saw none other than the ghost of Sid Kilman round the corner of the trailer and head straight for Tiffy! 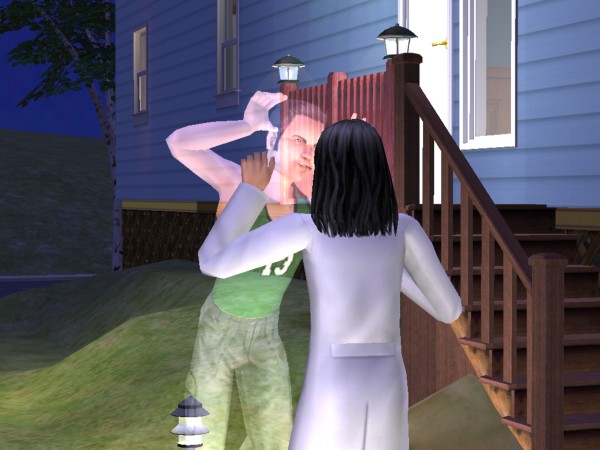 Upon reaching her, he let out a horrific cackle and made as if to grab her shoulders. Tiffy jumped about three feet in the air and wrenched away, then turned back to get a good look at her assailant. When she realized who it was, she reached out to him.

But Sid didn’t seem to recognize her. He just made ridiculous faces at her before diving into the ground, leaving a misty trail of smoke in his wake.

Tiffy put her hand to her heart and seemed to be frozen for several seconds. Finally she took a deep breath and recollected herself, just in time for her carpool. 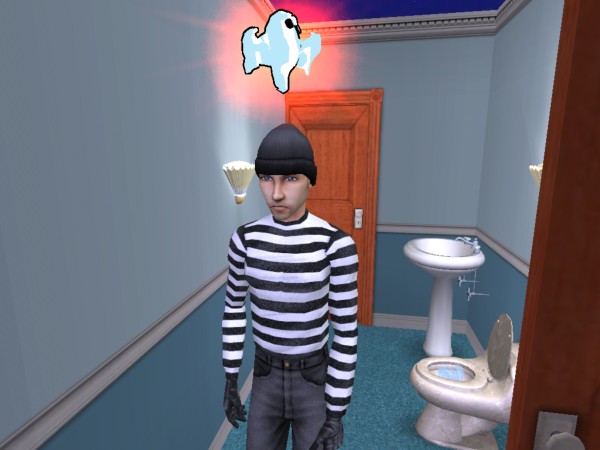 I glided back into the house to see what Joey was up to, as he had been restless all night, watching cable and eating leftover mac and cheese. I found him in the bathroom, staring out the window to the front yard. He was in shock, of course, from seeing Sid’s ghost outside. It seemed like aeons before he finally snapped out of it and started up his bath. 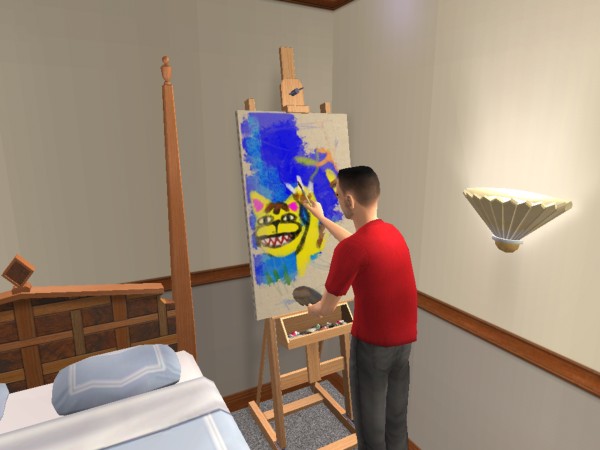 After taking a long nap, Joey got up and started painting what I must say were slightly disturbing pictures. It was almost as though he had reverted back to his childhood! I felt sorry for the poor boy. Seeing his father come back from the grave seemed to have done quite the number on him. Will he shake out of it before his upcoming wedding? Will he and Tiffy resolve their differences? And what’s the deal with Sid? Tune in for Part 2, coming soon!

6 thoughts on “The Past and the Pending, Part I”