After a good night’s sleep, the trio visited the Village Point Lighthouse and Vivarium.

Elvis checked in briefly (so quickly that I didn’t get any pics! Heh), then went to work on upgrading the speed of his houseboat. Lucas played with Betsy so she could get some exercise after being stuck on the boat all night. 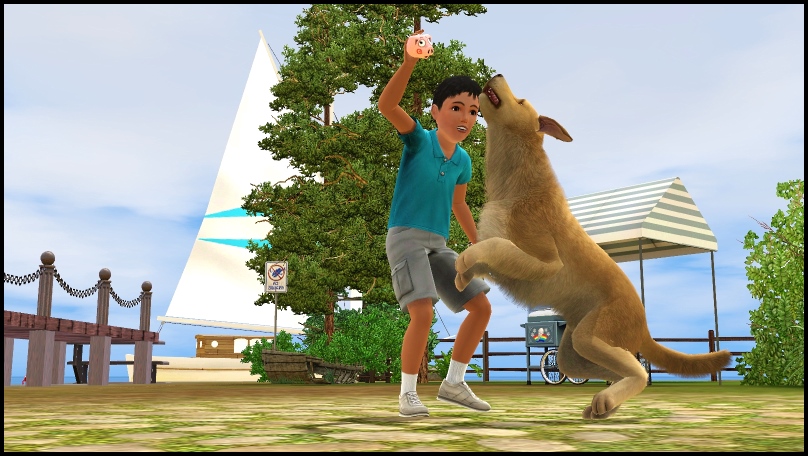 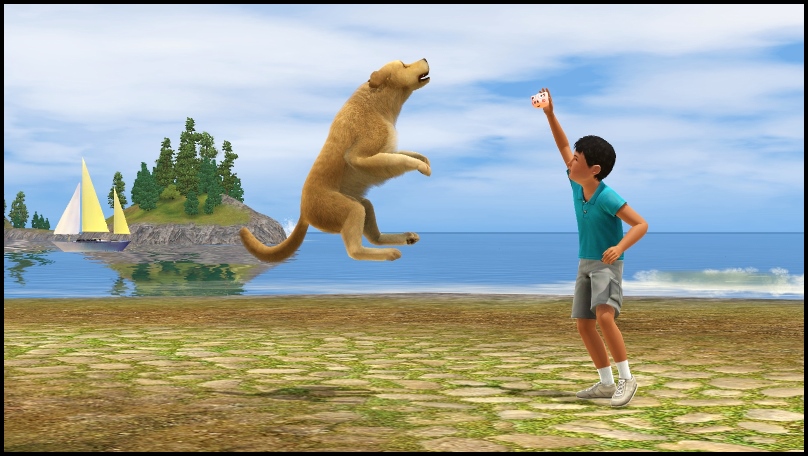 Then Lucas went into the lighthouse to look at the fish. He ended up having a friendly chat with one of his schoolmates, Tasha Wade (who is based on Tedhi’s Sim-self). 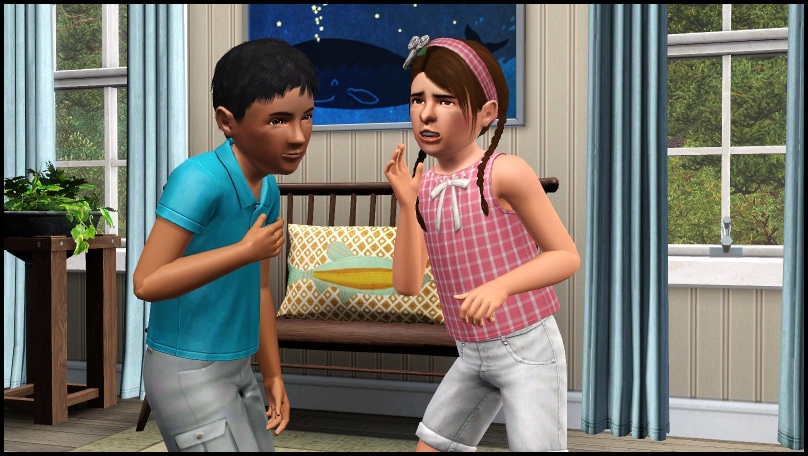 Tasha: Hey, you wouldn’t happen to have any COOKIES, would ya?

Eventually Elvis called Lucas and Betsy back to the houseboat, and they started off on the last leg of their journey. The houseboat really zoomed along now that Elvis had given the engine a boost. They sailed around Manketta Island and the lighthouse there (near where they had been fishing in their rowboat just a few days before). 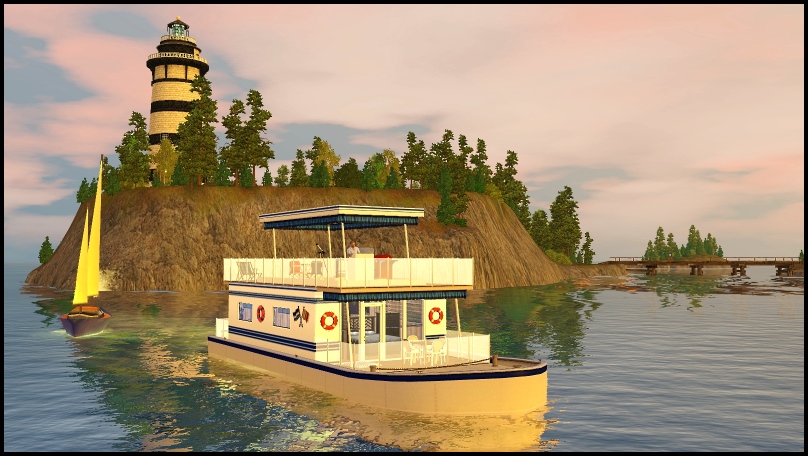 They made it back to Timberline Beach just as the sun was setting. Elvis was glad to see their pier in the distance (and another pier that had popped up while they were gone, heh). 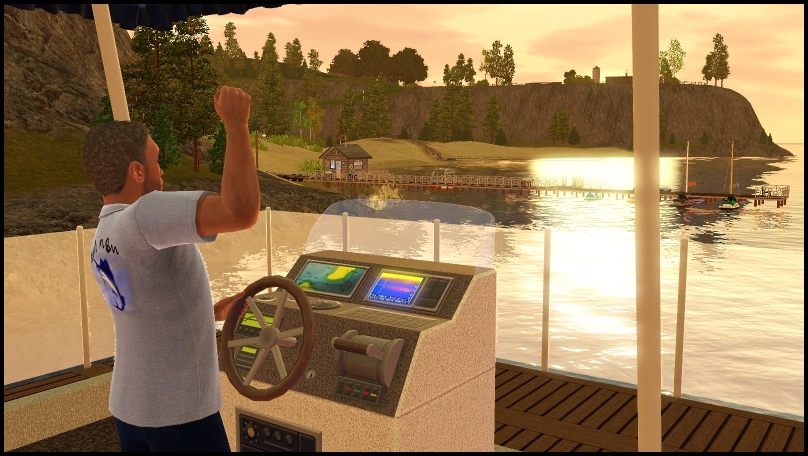 Elvis backed the boat carefully into its dock…they were almost home! 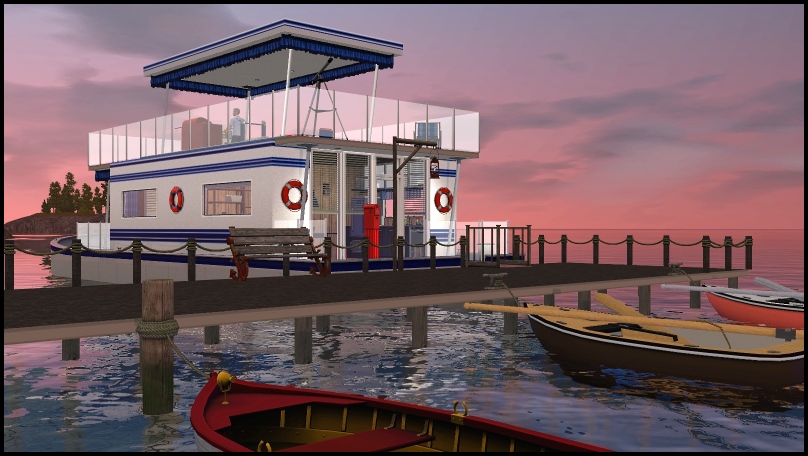 Betsy was overjoyed to be back on land for a good, long while… 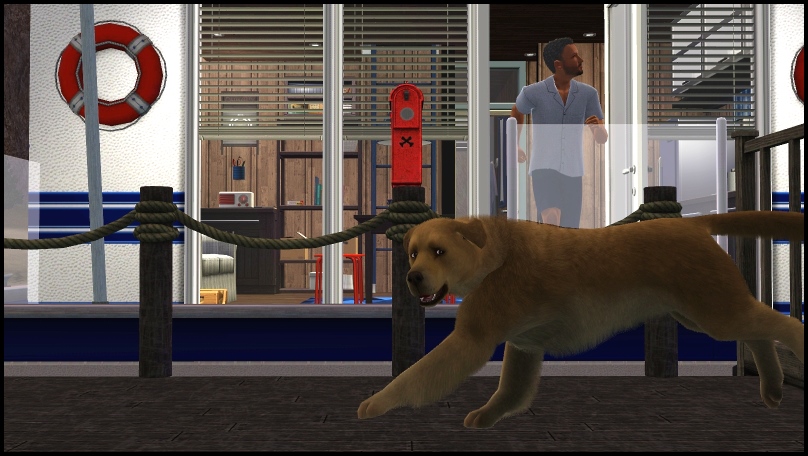 Of course things weren’t quite how they had left them…two of Elvis’s plants had died. 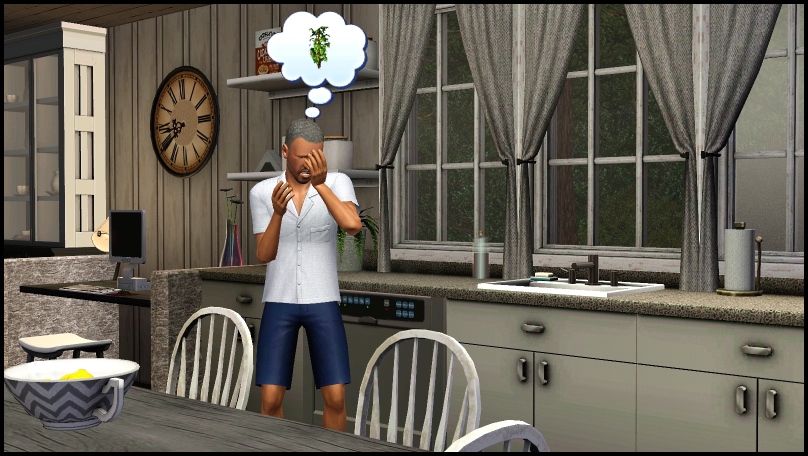 Lucas asked Elvis to read him a bedtime story, which made me go “awwww…”, even though they had to use Elvis’s bed for it! 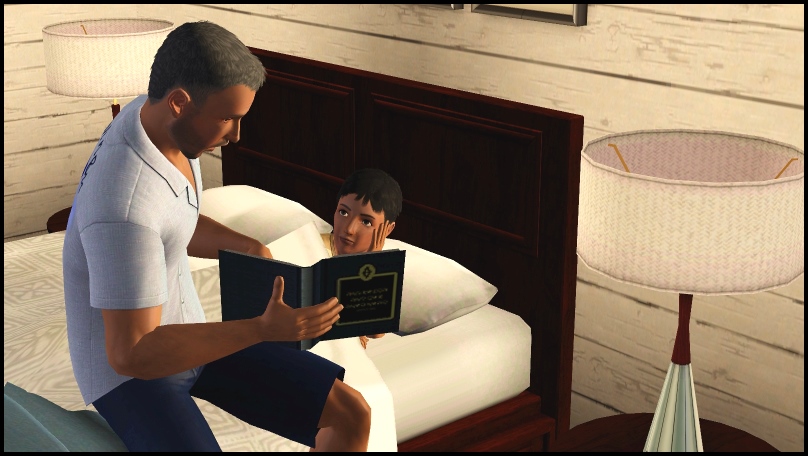 Lucas fell asleep before the story was done, and, not wanting to disturb him (or Betsy), Elvis kissed him on the forehead and went to sleep in Lucas’s bunkbed. 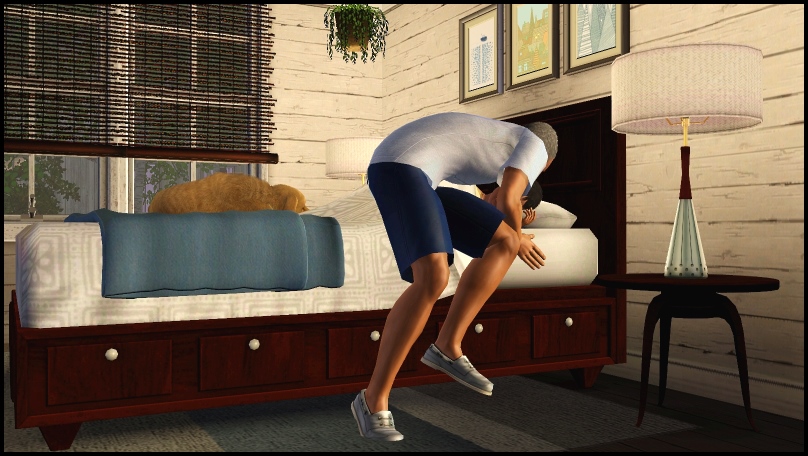 The next morning, Lucas found the mascot kits that had been left there while they were on vacation. (There had been FOUR of those suckers…I had deleted one already. The darned mascot showed up every single day while they were gone — I ended up downloading a mod to get rid of the mascot intro altogether. LLAMA, BEGONE!) 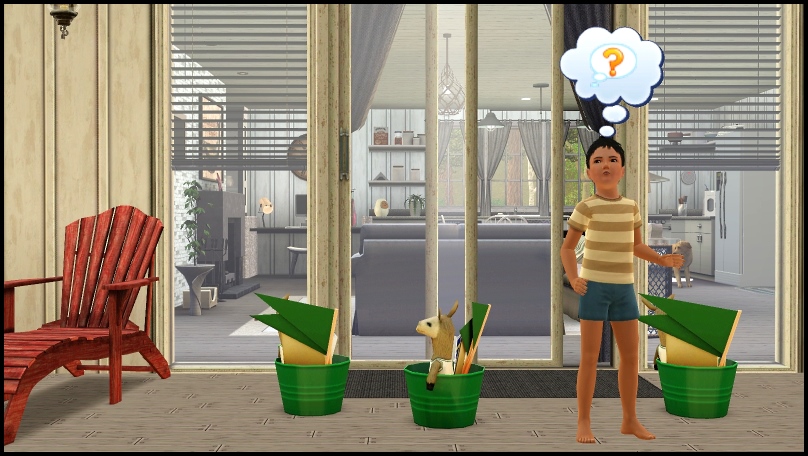 Lucas: WHO LEFT THESE DARNED BUCKETS AND WHY?!?

A few notes about houseboating:

As much as I enjoyed this little trip around the island, there were a lot of weirdnesses that made it less fun than it could have been. *chuckle* For one, the aforementioned llama mascot, who visited every day while they were gone. Now, granted, that might have just been a weird mod conflict or some corruption in my save, but the thing is, every time the llama mascot rang the doorbell, my Sims would teleport home to answer it!!! *facepalm* Sometimes they’d be sleeping when it happened, then teleport home in the morning! I’d click on one of their portraits and suddenly be at their house…so annoying! I’m not sure if that’s an IP glitch or what. I would just teleport everyone back to the boat whenever it happened, but good grief, I hope they fix that.

The teleporting thing happened a lot with Betsy, too — I think because she was experiencing route failure so often on the boat. One second she’d be walking backwards trying to get somewhere on the boat, and the next second she’d be back at the house, snoozing away in her dog bed. *doh* I’m sure she would have rather stayed put, but I couldn’t have her living at the house by herself! ;-P

There are some other things that are weird, such as the refrigerator contents being shared between the two lots (the leftover hot dogs from the house were available on the boat), and no mail showing up on the houseboat while they were out and about (I didn’t know there were bills until I got the “pay your bills now or else!!!” pop-up message). I suspect those things are to be expected when your Sims have a second home, but it was still weird.

Despite the issues, though, I am loving houseboats and other forms of water transportation — they really fill a void in Whimsett Cove, and I’m happy to have them. Next up I’ll probably show pics of another pier and houseboat I’ve built for a couple of new guys. Or I might show another new family…I have about three of them I haven’t shown pictures of yet! Or gosh, my pizzeria and book shop…I haven’t shown that here on the blog yet, just at TSD! And I want to post a new map..gah, so much to do. *lol*

Thanks for reading, and Happy Simming! :)