(Quick note: As you can see, I’ve switched over to a different WordPress theme. I haven’t figured out how to get my “Recent Comments” working again, but otherwise I think everything is here. I liked my old template quite a bit but wanted to update to something more recent and also make my archives/categories easier to navigate — they now show the posts as excerpts instead of full posts, and there are five per page instead of one. Anyway, let me know if anything looks weird or wonky or if you’re just having a bad day and need a cookie.) 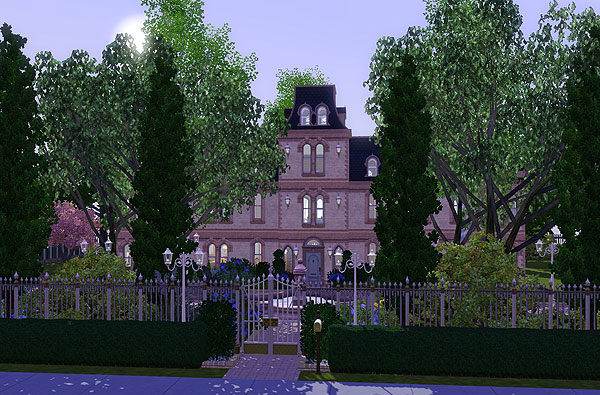 Work continues on Plumbridge Island in little bits and pieces. Building lots and creating Sims in between tinkering with Create-a-World breaks up the tedium somewhat. Plus it helps me to develop the atmosphere of my world a bit more. So over the past week I’ve been working on the Royal Palace, home of the Mittendorf family. I’m still not done with all of the decorating, but I’ve finished the exterior and most of the landscaping. Much like the Plum Point Lighthouse, the Palace is one of the major landmarks of my world, so it was extremely satisfying to see it take shape.

As you can see in the first pic, I overdid the foliage a bit, but I wanted to convey a sense of mystery and privacy. The trees get in the way when I’m playing though, so some of them might have to go. It’s too bad, because I love me some trees!
END_OF_DOCUMENT_TOKEN_TO_BE_REPLACED 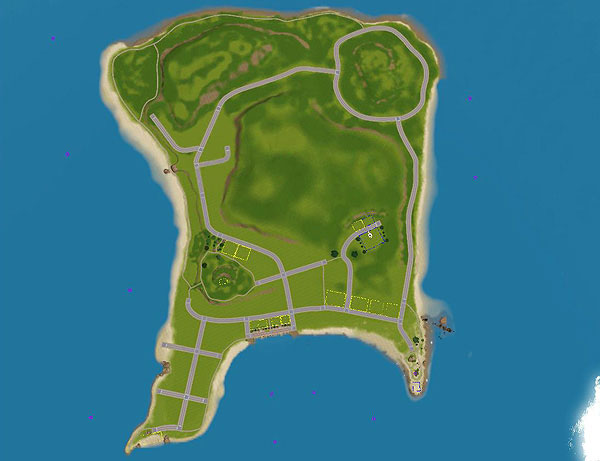 Work continues on Plumbridge Island, even though I didn’t get as much time to putter around with it as I hoped over my long weekend. I have finished the terraforming and the roads, at least, and done some preliminary terrain-painting. I’ve placed a few more lots as well and even added some trees. (LOOK! TREES!)

I reshaped the southwestern peninsula a bit and added a beach. There’s also a “harbor walk” (dunno what else to call it) made out of the France bridges. I’m not sure if I want to keep it yet or not, but if I do, I’ll post some pics.

I’ve also decided that Plumbridge Island is now a country unto itself, albeit a tiny one, kind of like Monaco or Liechtenstein, only much, much, MUCH smaller. It has a constitutional monarchy as well as an elected governor who oversees a group of councillors. I know, sounds a bit weird, but I decided I wanted some royalty on my island, so there you go. The military rabbithole will be located on the training grounds of the Royal Guard, near the Palace (a Victorian mansion that I am REALLY looking forward to building).
END_OF_DOCUMENT_TOKEN_TO_BE_REPLACED 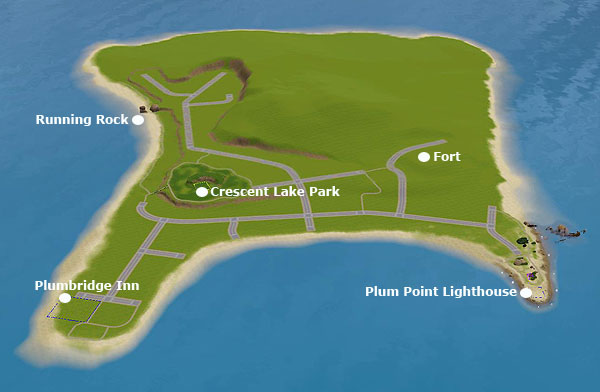 Building your own world for The Sims 3 can be time-consuming and sometimes very tedious work, but I have to say I’m enjoying the crap out of it. I’m feeling more and more comfortable with Create-A-World (though I still think it could be a LOT more intuitive and user-friendly) and getting a huge kick out of experiencing my world in-game. The silliest little things can thrill me, like running my test Sim around the lighthouse and hearing the clamor of the seagulls, or watching the mailwoman race down the pathway to deliver his mail. It’s weird how creating my own world has gone from being completely infuriating to totally exhilarating. And thank goodness it did, because I’m having some serious fun.
END_OF_DOCUMENT_TOKEN_TO_BE_REPLACED

After much pulling out of hair and clawing out of eyeballs, I’ve settled on creating an island world. I avoided it for a long time because everyone and their dog is making an island world, and I wanted to do something different. Plus all my ideas were for an inland town. But CAW just wasn’t cooperating, and I didn’t want to retrofit Riverview. I wanted something new, something that is completely mine (ok, mostly mine).

So after some thought and playing and building and planning, I’ve come up with Plumbridge Island. It’s still in its embryonic stages but I thought I could share my trials and tribulations as I go. 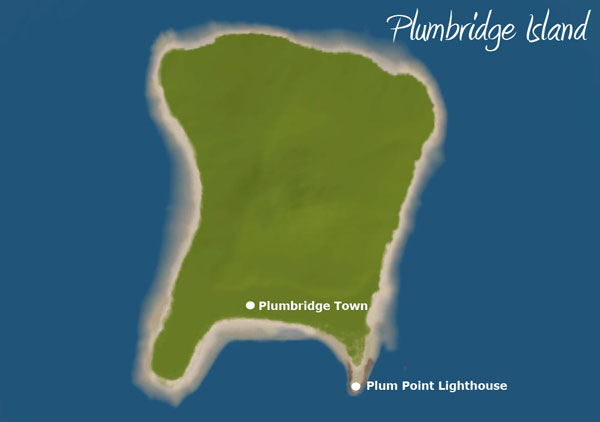